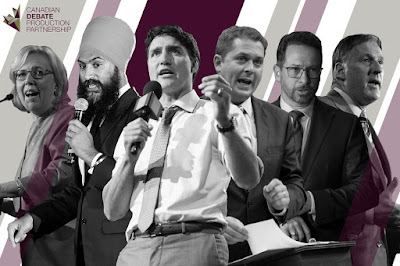 With neither Scheer nor Trudeau closing in on a majority win, we can anticipate some government involving some parties that is at least far more representative than the last two we've endured. Government will likewise be more accountable to Parliament than we experienced under Harper and Trudeau. Confidence votes will again have meaning as a vehicle to restrain government excess and wrongdoing.

Whether this will lead to electoral reform is unclear. Parties that seek to form majority governments, if not now then in the future, don't have much appetite for truly representative democracy. They don't want to have to get the support of 50 or 60 per cent of the electorate, not when they can get those majorities by winning margins in the mid- to high-30s.  Nor do they give a Fat Fiddlers Frack if they get majority power by nullifying the will of three out of five voters.

Singh may emerge the clear winner because I'm not sure that any of the others will have a secure job come the morning of the 22nd. Scheer was never more than the Tories' placeholder and may not be at the helm in the next election. Trudeau? What do you do with a guy who has snatched defeat out of the jaws of once-certain victory? Pretty but still stammering. Damaged goods. Did not live up to the legendary name. Elizabeth May not. Still much beloved by the Green party rank and file, this was her chance to stage a Green breakthrough that now seems a wishful thought. Might be time for fresh blood but whose?

We're still guessing but I expect the party leaders have a pretty good idea what awaits them this time next week.

What we won't know after we learn just who gets how many seats in the HoC is how the new face of Ottawa will respond to the gravest threat still (yes, still) facing our country - climate change. We have a people seemingly worried, a lot, about climate change just not particularly inclined to embrace the difficult measures needed to deal with it. Will any have the courage to say, "Listen up, we're in trouble and this is how it has to be"? No, they didn't get elected on their courage to do unpopular things, no matter how necessary. This was a full-bore, suck-up election that captivated almost no one.

My guess is that it'll take a month or two, possibly more, as our mediocre leadership struggle to address or duck what Rumsfeld called the "known unknowns." Maybe we should be grateful if only they can keep Canada from falling apart.

And now, as the Pythons would say, for something completely (okay, a little) different: