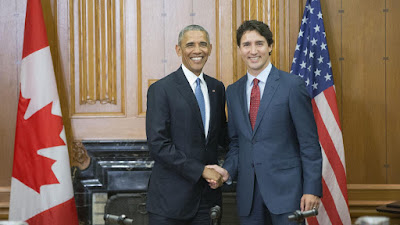 The Dauphin got a shot in the arm from an old friend today. Barack Obama has endorsed Justin Trudeau for a second term in office.


"I was proud to work with Justin Trudeau as President," Obama wrote on Wednesday afternoon. "He's a hard-working, effective leader who takes on big issues like climate change. The world needs his progressive leadership now, and I hope our neighbors to the north support him for another term."

The endorsement of a former American president is a rare — and possibly unprecedented — event in Canadian politics. But this is the second time Obama has spoken up to endorse an international leader since he left office. In May of 2017, Obama recorded a video in which he endorsed Emmanuel Macron for the French presidency.

Thanks for the warning. I've prepared my earplugs for all the banshee wailing about foreign interference in our elections that's sure to come.

Maybe Scheer can retaliate by getting the Great Orange Bloat to endorse him. One thing about Obama is that he's vastly more popular with the Canadian public than Scheer or Trudeau or, probably, their popularity combined.

It is only their own rule limiting presidential terms that resulted in Obama not being in office today.

That's true, but I hear he wears tan suits...

And, worse still, Michelle wore a sleeveless dress. How undignified. Meanwhile you can see Melania in the altogether aboard Trump's jet if you
Google it.

There's a good 20-25 minutes of hilarity if you visit the NBC news web site. Trump has lapsed into heavy duty meltdown. As the kids would say, "he's losing his shit."

It has to be tough on a guy who relies on absolute loyalty and Omerta to see all his rats scurrying out of the White House to testify before House committees. At some level Trump knows what they know.

Would he try to trigger a civil war? He's said that could result from any effort to impeach him.

At least one of Trump's fan clubs has been talking about orders having been issued to elements of the reserve armed forces for positioning in anticipation of the arrest of Trump and his entire cabinet by the deep state. That's from a couple of days ago. There might be more of this stuff flying around by now, but I haven't been alerted and I won't go looking for it.

Having support in whichever way from the USA should be an insult.

Despite the bleatings of the Trump trolletariat, musing about whether the armed forces will remain loyal to their Commander in Chief, the reality is that the forces are sworn to protect the Constitution, not the President.

It is only because of the reaction time required for a nuclear attack that the President can authorize the use of nuclear weapons on his own authority. This would likely have been brought in under Eisenhower or Kennedy. Otherwise, the President is one of the three branches of power, and subject to the same laws. As Trump discovered to his dismay, he can't just order the military to nuke somebody out of the blue, like Zeus tossing lightning bolts at whoever annoys him. He can only order them to execute a previously planned set of orders from the book.

Hey Anon 8:21
"the reality is that the forces are sworn to protect the Constitution, not the President."

you are likely correct, but that's not why it won't happen.

Large parts of the US military & law enf. have been colonized by the Christianists and a lot of people in the 'private security biz' are getting rich from tRump. They reinvent the meaning of the constitution at whim. (But quietly behind the FISA courts etc). They'd need genuine political cover to go live in any coup/rebellion.

MoS says
"Would he try to trigger a civil war? He's said that could result from any effort to impeach him."

Clinton WAS impeached. (Not convicted.)
No need for the military until the Senate convicts.
Will that happen? (Will pigs fly?)
Impeachment and Senate trials are primarily political, only tangentially legal.
If tRump is faced w conviction (like Nixon) he'll resign.