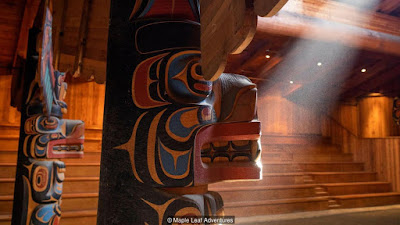 The survivors learned some brutally costly lessons but, when Covid-19 rolled around, BC's coastal first nations were ready to lockdown in their own way.  From BBC News:


The idea of Covid-19 entering the remote First Nation’s community of Bella Bella terrifies Marilyn Slett, chief councillor of the Heiltsuk Tribal Council. Located on British Columbia’s (BC) central coast, the water- and air-access only community of 1,400 is a gateway to Canada’s Great Bear Rainforest, a region the size of Ireland that’s famed for its eco-tourism opportunities.

“Our laws and traditions are oral,” said Slett. “They’re passed down by our Knowledge Keepers,” a group of Elders who have learned the Nation’s customs, traditions and protocols. “We only have 30 fluent Hailhzaqvla-speaking Elders left,” she added. “We’ll uphold Heiltsuk laws and do everything we can to protect them.”

Slett is referring to the emergency measures her community has put in place. Like many Indigenous communities in coastal BC, and around the world, the Heiltsuk Nation has enacted a strict lockdown, opting to go well beyond the provincial guidelines by banning all non-essential travel in or out of their territory. 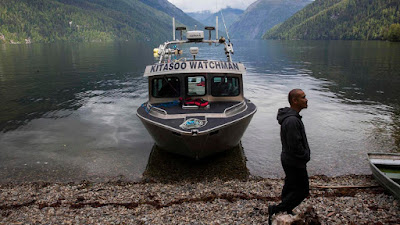 On the roads and in the public ferry terminals leading into the normally tourist-friendly communities on BC’s coast, checkpoints have been set up, manned by Guardian Watchmen who typically act as friendly ambassadors and cultural interpreters. Out on the water, these Guardians are using AIS (Automatic Identification System) to identify, track and intercept any boat that arrives in their waters. Their role is to ensure the vessel should be there and turn it back if it’s not. Shifted to a new frontline, these traditional protectors, stewards and guardians of First Nations lands and waters have begun rediscovering the power of protecting a Nation’s greatest treasure: its people.

It’s not difficult to understand why the Heiltsuk have opted to manage the pandemic by following the advice of their own leaders and shutting off their community to outsiders. For 14,000 years, they have lived in balance within a territory that spans about 15,540 sq km and extends through the Great Bear Rainforest. Heiltsuk historians estimate that at their cultural peak, as many as 20,000 people lived in 50 summer and winter villages set in ancient forests of huge Sitka spruce, red cedar, western hemlock and Douglas fir.

European contact, dating from the 1780s, brought devastation. “We survived smallpox, we survived measles, we survived government policy,” Slett said. But the onslaught took its toll. In the 1880s, the remnants of the severely depleted Heiltsuk communities gathered into one village near Bella Bella: their population had been diminished to around 200 people. 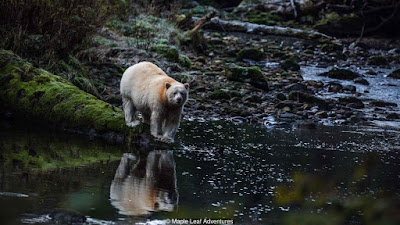 ...The rugged landscape and wildlife, which includes whales, coastal wolves, black bears, grizzly bears and the spirit bear, attracts visitors from all over the world and makes up a vital part of the local economy. Robinson says that closing their community in mid-March was a hard choice, but it was just in time. Just south, Heiltsuk Watchmen on the water reported they started turning back yachts. American and Canadian boaters trying to flee big cities and those who wanted to hunt or fish (which is considered essential in BC, but not by the coastal communities) had started heading for more remote, Covid-19­-free communities.

...As the Guardian Watchmen shift from scientific data gathering and land preservation to guarding the frontlines, they’ve encountered pushback from travellers who question their authority. While British Columbia’s Ministry of Indigenous Relations and Reconciliation agree that First Nations have the authority to restrict travel into their communities, at the same time the province, like many places, has begun reopening, forcing Indigenous communities to protect themselves.

...In an effort to keep out outsiders, Haida Gwaii and the Central and North Coast, including the Heiltsuk and Kitasoo / Xai'xais Nations, have set up a coalition. They are working collectively to let visitors know that while they are valued and wanted, now is not the time to visit. The communities are simply too vulnerable to risk any loss.

...All along the coast, communities are relying more heavily on traditional marine foods like eulachon oil, smoked salmon, fresh herring eggs and roasted seaweed. Community gardens are being started and leaders are encouraging people to find strength in the power of looking after themselves.

“If you look through our histories, I can’t imagine our ancestors or our leadership of 30, 40, 50, 100 years ago having the kind of confidence to determine our future this directly,” said Henry. While the financial implications of shutting down tourism will hurt communities, he added, the whole point of tourism all along has been to strengthen the culture: Nations making their own decisions does that.

I just got an email from a California company that organizes long-distance motorcycle tours. It was an invite to a ride from Anchorage into Yukon then meandering down the length of British Columbia and ending in Portland, Oregon. Mid-July to August. 2020, the Year of Covid, yeah. One of the advertised highlights is travel through remote First Nations villages such as the Nisga'a village of Gingolx.

They're apparently confident we'll have opened our borders to summer tourists by mid-summer and the the Nisga'a and other First Nations will greet them with open arms.  Being a thoughtful guy I sent them a link to this BBC report.
Posted by The Mound of Sound at 7:06 AM

First Nations know only too well the cost of "civilization," Mound. Who really is "backward?"


Troy Thomas of the Secwepemc First Nations up in the Shuswap territory told me that their ancestral history spoke to these times and how their connection to nature would be life-saving. Living near the coast allowed them to develop cultures that were complex and highly artistic. I knew a Nisga'a carver who showed me the many uses they had for a cedar tree, how they harvested berries and other naturally growing foods, the materials they used to create the brightly coloured paints/stains they used, how they used the rough skin of sharks as sandpaper. They had plenty of salmon, cod and shellfish that they knew how to preserve, often by smoking.

It's small wonder they want to keep the rest of us away while this pandemic plays out. I really don't think we've got any right to complain.


I read her piece, Sal. She is gifted.