While We Dream Of a Better World, Sinister Forces Are at Play. 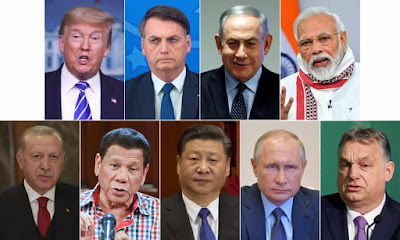 Lockdowns are golden opportunities for those with a mind and the means to exploit them.


Under the cover of coronavirus, all kinds of wickedness are happening. Where you and I see a global health crisis, the world’s leading authoritarians, fearmongers and populist strongmen have spotted an opportunity – and they are seizing it.

Of course, neither left nor right has a monopoly on the truism that one should never let a good crisis go to waste. Plenty of progressives share that conviction, firm that the pandemic offers a rare chance to reset the way we organise our unequal societies, our clogged cities, our warped relationship to the natural world. But there are others – and they tend to be in power – who see this opening very differently. For them, the virus suddenly makes possible action that in normal times would exact a heavy cost. Now they can strike while the world looks the other way.

For some, Covid-19 itself is the weapon of choice. Witness the emerging evidence that Bashar al-Assad in Damascus and Xi Jinping in Beijing are allowing the disease to wreak havoc among those groups whom the rulers have deemed to be unpersons, their lives unworthy of basic protection. Assad is deliberately leaving Syrians in opposition-held areas more vulnerable to the pandemic, according to Will Todman of the Center for Strategic and International Studies. As he puts it: “Covid-19 has provided Assad a new opportunity to instrumentalize suffering.”

Meanwhile, China continues to hold 1 million Uighur Muslims in internment camps, where they contend now not only with inhuman conditions but also a coronavirus outbreak. Those camps are cramped, lack adequate sanitation and have poor medical facilities: the virus couldn’t ask for a better breeding ground. What’s more, Uighur Muslims are reportedly being forced to work as labourers, filling in for non-Muslims who are allowed to stay home and protect themselves.

Elsewhere, the pandemic has allowed would-be dictators an excuse to seize yet more power. Enter Viktor Orbán of Hungary, whose response to coronavirus was immediate: he persuaded his pliant parliament to grant him the right to rule by decree. Orbán said he needed emergency powers to fight the dreaded disease, but there is no time limit on them; they will remain his even once the threat has passed. They include the power to jail those who “spread false information”.

Trump, Bolsonaro, Modi - they're all doing it. Trump has used the chaos to continue dismantling environmental protections. Bolsonaro has sent troops into the Amazon to provide security for the loggers. Modi has sent security forces to crack down on Indian Muslims. Netanyahu is springing a major theft of the Palestinian territories.


The pandemic has been a boon to the world’s authoritarians, tyrants and bigots. It has given them what they crave most: fear and the cover of darkness.

Right from the start of this crisis I have been wary of those who would learn the wrong lessons. Governments love a crisis. The people demand that those who govern "Do something!" So they do. It is frequently an opportunity to grab more power.

You may have see this:

Harper, Kenney and the Usual Suspects See the Pandemic as an Opportunity

No argument here, Toby. The swine are relentless.