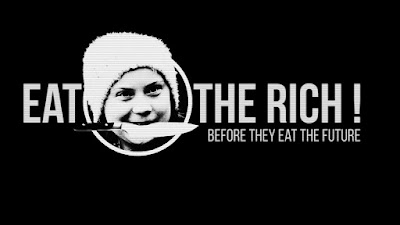 As if the rich need to give us another reason to despise them.
This just in. The richest one per cent are responsible for greenhouse gas emissions double that of the bottom 50 per cent.

The report, compiled by Oxfam and the Stockholm Environment Institute, warned that rampant overconsumption and the rich world’s addiction to high-carbon transport are exhausting the world’s “carbon budget”.

Such a concentration of carbon emissions in the hands of the rich means that despite taking the world to the brink of climate catastrophe, through burning fossil fuels, we have still failed to improve the lives of billions, said Tim Gore, head of policy, advocacy and research at Oxfam International.

“The global carbon budget has been squandered to expand the consumption of the already rich, rather than to improve humanity,” he told the Guardian. “A finite amount of carbon can be added to the atmosphere if we want to avoid the worst impacts of the climate crisis. We need to ensure that carbon is used for the best.”

The "global carbon budget" describes the amount of greenhouse gas we can continue to emit without triggering catastrophic, runaway global heating.  Science has pretty accurate estimates of how much man-made greenhouse gases are already in the atmosphere. Science has an accurate estimate of how much more atmospheric loading will cause us to break through the "do not exceed" point.

For years rich and poor nations have debated how this remaining capacity should be allocated. Poor countries contend that their people, who have contributed so little to the emissions problem, should have a preferential claim. They would even settle for per capita equality.

Rich countries don't agree. We're the industrial nations whose people expect to live the good life. We've got to keep this party going. Besides, there are so many poor people that if we divvied up the budget on a per capita basis the developed countries would have to decarbonize their economies and societies almost overnight. We need the lion's share of that carbon budget. Ask our prime minister if you don't believe it. Ask your premier.

This is why we're not going to come up with answers to the climate breakdown. We don't want to. We're not having it. It's inconvenient.

One would think that the 1% would want the rest of us to be comfortable because the uncomfortable will storm the Bastille and bring out the Guillotine. Signs of unrest are everywhere; it is only a matter of time.


Toby, the 1% are pretty quiet these days. It seems that they are aware of the risks they face. Some time ago I did a post about some futurist from a prominent NY university who got a $30,000 fee to present what he thought was a luncheon speech/lecture. He showed up at the venue only to find just three hedge fund managers. They didn't want his prepared address, just to ask questions.

He related one notable exchange. One of the fund managers had a bolthole/retreat in some remote spot. He even had a security team to guard the retreat and protect his family. What concerned him was, when the collapse he perceived looming happened, would money even exist? And if cash and other means he might ordinarily use to pay his security team became worthless might his guards turn on him? How was he to protect himself from his own armed security guards?

It was a truly creepy account but it suggests they're alive to their weakness and vulnerabilities if dystopia ensues.

I can't be counted among the 1% but to the hungry multitudes I may look rich. My shelter keeps out the nasty weather; I get enough to eat; my community is reasonably safe; I'm comfortable. All that could make people like me a target when the crunch comes. There is no safe.

The road ahead is full of dangerous curves, Toby. You have to make sure the tires are good, there's gas in the tank and the brakes work.

I have never in my long life seen so many homeless.
For ever single homeless there are many others just hanging on to what they have; often by over extending at the bank or at the leisure of the private loan/loan shark companies as advertised on a regular basis on Vancouver radio channels.

As the number of homeless grows and they roam the streets , the better, if only slightly, off circle the wagons for protection.

Vancouver is a municipal ruin, TB. I loved living there in the 70s and 80s when the city was more or less in balance. Come the 90s and that began to change. The past 20 years have witnessed a severe decline in what made Vancouver so habitable. Like the Earth generally, Vancouver became overpopulated, overpriced and under served. The low-wage workers that no city can function without are leaving. Restaurants and shops can't get help. Doctors are in critically short supply. Those who want a better quality of living leave. And those on the bottom rung sometimes fall off.

Sadly I have long accepted Vancouver as a failed city when discussing the homeless.
It is in my city of Nanaimo and also in Victoria which I visit that I made my remarks.
Nanaimo has taken steps to provide housing for the homeless but as we all 'should' see the rate of homelessness is increasing at a rate that exceeds the 1% increase in wealth.
Canada has always been fortunate to have a much above average standard of living that has left other western countries drooling with envy.
Canada has also been behind the curve of world social issues.
Catching up with the rest of the world is, to say the least, disconcerting!
We cannot live in La La land forever.