Mueller Bunted. He Was Never Swinging For the Stands. 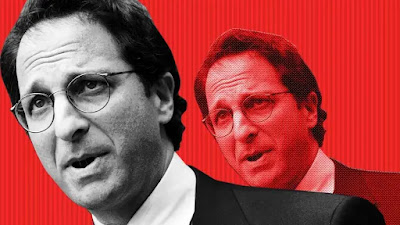 You probably already suspected that the Mueller report fell far short of what had been expected.

Among Mueller's team of lawyers there was one who terrified Trump's legal team - Andrew Weissmann.  His book, "Where Law Ends: Inside the Mueller Investigation" is scheduled for release next Tuesday.

Weissmann says Mueller's team held back out of fear that Trump might shut them down. There's a word for that - intimidation.

The team led by Robert S. Mueller III, the special counsel, failed to do everything it could to determine what happened in the 2016 election, shying away from steps like subpoenaing President Trump and scrutinizing his finances out of fear that he would fire them, one of Mr. Mueller’s top lieutenants argued in a new book that serves as the first insider account of the inquiry.

“Had we used all available tools to uncover the truth, undeterred by the onslaught of the president’s unique powers to undermine our efforts?” wrote the former prosecutor, Andrew Weissmann, adding, “I know the hard answer to that simple question: We could have done more.”

Mr. Weissmann sharply criticized the president as “lawless” but also accused Mr. Mueller’s deputy, Aaron M. Zebley, of being overly cautious, according to an account in The Atlantic of the book, “Where Law Ends: Inside the Mueller Investigation.”

While the president and his allies have portrayed Mr. Mueller’s failure to indict any Trump campaign figure for collusion-related crimes as vindication, Mr. Weissmann pointed with frustration to the significant impediments that prevented the special counsel’s office from learning all there was to know about interactions such as those between Mr. Manafort and Mr. Kilimnik.

...The constant threat that the president might fire them — as he tried to do several times, only to be thwarted by subordinates who refused to carry out his wishes — caused the special counsel team to be timid rather than aggressive in seeking information.

“The specter of our being shut down exerted a kind of destabilizing pull on our decision-making process,” Mr. Weissmann wrote.

He was scathing about Mr. Trump and his allies, calling the president “lawless” and “like an animal, clawing at the world with no concept of right and wrong.” He accused Attorney General William P. Barr, Mr. Mueller’s old friend, of having “betrayed both friend and country.” Mr. Barr used his early access to the special counsel report to warp public perception of it, including declaring Mr. Trump exonerated of obstruction of justice when the report recounted numerous episodes in which the president had tried to impede the inquiry.

...While Mr. Weissmann wrote with affection about Mr. Mueller, he also portrayed his boss as being excessively diffident. Even when the investigation was wrapping up, reducing the risk that they would be prematurely fired, Mr. Mueller held back by not clearly stating in the report that Mr. Trump had obstructed justice — which later gave Mr. Barr his opening to put a more positive spin on the team’s findings than the Mueller report showed.

Mr. Mueller’s thinking was that because Justice Department policy forbade indicting Mr. Trump while he was in office, it would not be fair to accuse him of a crime when he could not have a speedy trial to defend himself. But Mr. Weissmann noted that under the special counsel regulations they were writing only a confidential report to the attorney general, and that it was not their decision whether to later make it public.

The reasoning for their forbearance was incoherent, Mr. Weissmann complained to a colleague whom Mr. Mueller assigned to draft a passage of the report explaining that they were not rendering a prosecutorial judgment about whether Mr. Trump had obstructed justice.

“It seems like a transparent shell game,” Mr. Weissmann wrote that he told the colleague. “When there is insufficient proof of a crime, in Volume 1, we say it. But when there is sufficient proof, with obstruction, we don’t say it. Who is going to be fooled by that? It’s so obvious.”

The game was rigged and the fix was in when Mueller let Trump avoid testifying under oath before the grand jury. Trump will tell 20 lies in 10 minutes and he's incapable of stopping himself. That's why Trump kept screaming about perjury traps - the minute he's sworn in, he's caught. Mueller allowed Trump's legal team to craft tricky written responses and even negotiate the questions Trump would "answer."

And then the Dims did what they do best, go flying as the GOP pulls away the football. By ignoring the case Mueller had painstakingly laid out, the Dems accepted Trump's lawlessness. Of course, they'd done that for years by ignoring Trumo's flagrant violation of the emoluments clause and running concentration camps at the Mexicsn border. Pelosi only went ahead with impeachment after Trump targeted Biden. That was pure partisanship rather than concern for the Constitutional order, and it allowed the GOP to respond in kind.

This is why I don't hold out great hope for the Dems using impeachment to derail the appointment of RBG's replacement. By and large, the party's gutless and more interested in corporate donations than resisting authoritarianism.

It's getting harder to identify a western government that still can inspire, Cap. Merkel's heading for the exit and, after her, what's left? BoJo?

John Turner's death brought back memories of the calibre of people once drawn to politics and public service. Pearson, Trudeau the Elder, Laurier, St. Laurent, and others - we don't see their like any more.

Now America is run by a snake oil salesman and the towns folk haven't run him out of town.

Perhaps the Dems have some master plan to not get steamrollered in November but it's getting harder to rule Trump out.

Alternatively, the guy's not going to sell many books with a story about an investigation that failed because it was based on bullshit.

So he invents this moronic notion that Mueller held back because he was frightened of Trump. And Russia-gaters can continue to embarrass themselves beating their dead horse while everyone else rolls their eyes.

A "moronic notion"? Thwap you need to temper your judgment and read a lot more. Try starting with the US Senate report on Russian meddling that was withheld until after Trump's impeachment was concluded. It's a truly bipartisan report and the most remarkable thing is that it was reached with a GOP majority on the committee.

Roll your eyes as you wish. Those in seizures often do.

Russiagate has been very counter productive - both to American politics and international relations.

Russian oligarchs may have tinkered, but American oligarchs had decades of voting manipulation and fraud experience (at home and abroad) to deploy in 2016 and that is where Americans should be focused.