Playing Dominoes With the Earth 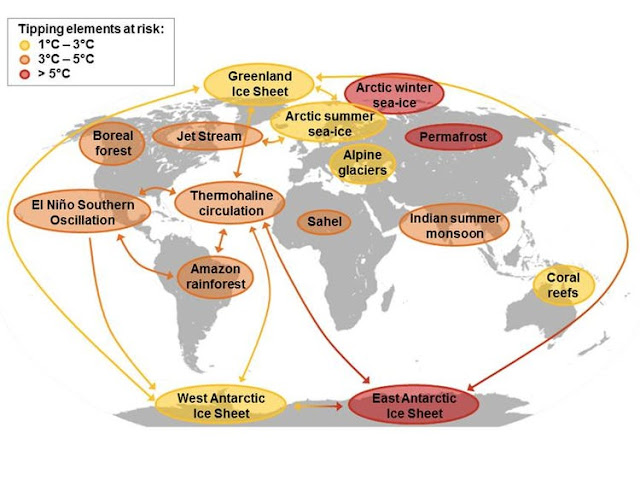 "Everyone who studies tipping point cascades agrees on two key points. The first is that it is crucial not to become disheartened by the magnitude of the risks; it is still possible to avoid knocking over the dominoes. Second, we should not wait for precise knowledge of exactly where the tipping points lie – which has proved difficult to determine, and might not come until it’s too late."

Talk is turning to "cascades."  It can have a number of meanings depending on context. For example, we're now facing a cascade of destabilizing events including the pandemic, the much broader spread of disease and pests, biodiversity loss, species exhaustion and extinction, wildfires, the onset of severe storm events of increasing frequency, intensity and duration, droughts and flooding, the disruption of global neoliberalism, the rise of authoritarianism and commensurate decline of liberal democracy, the risk of nuclear war and more. There are effective measures we could invoke but governments are not constituted to implement them.

Then there is the cascade of climate "tipping points." To grasp the nature of tipping points you have probably been in or watched a canoe lean over to the point that water rushes in over the gunwales. At that point somebody is going for a swim. There's nothing else for it.

In the context of the climate emergency, the cascade occurs when one tipping point triggers others to occur. These are also called "knock on effects."  In the Arctic the atmosphere warms, the snowcover retreats exposing the tundra (peat) beneath. The tundra, warmed by the sun, thaws and dries out. Being a natural fuel the tundra catches fire, adding the gases and black soot of combustion to the atmosphere. Meanwhile the permafrost beneath, where massive volumes of ancient methane and CO2 have been safely sequestered for millions of years, thaws releasing those plumes of greenhouse gases to the atmosphere. Like dominoes, one falls, causing the next in line to fall, until they're all down.

These tipping points are not uniform. Some are second-order events, others are third-order. There are others that are primary events such as the collapse of ice sheets in the Arctic and Antarctic. Those ice sheets are in retreat and they have the potential to reconfigure oceanic circulation patterns that regulate the climate over most of the Earth's land masses. There's an excellent article in The Guardian exploring these first-order tipping points and how one might trigger the others to cascade.

These primary-order events are critical because they could wipe out humanity or most of it. Yet, as I regularly moan, they're not even on our governments' radar. They're quite content to wait "until it's too late." That's a blatant dereliction of duty.

There are some who cling to fantasies, who think that adding 30 cents a litre to the price of gasoline is going to achieve something. It's not. There are some who imagine that we can arrest the loss of the great polar ice sheets. We cannot. Even if we arrested global heating today, those ice sheets are on their way out. It'll take centuries before they're entirely gone but the damage will be severe long before that happens.

Since before humans existed, Earth has had an “icehouse” climate, meaning there is permanent ice at both poles. But millions of years ago, the climate was in a “hothouse” state: there was no permanent polar ice, and the planet was many degrees warmer.

Intellectually we know how to deal with these looming threats. We have even enshrined that wisdom in our laws. It's called the "precautionary principle" and yet our governments routinely act as though they had never heard of it.

In 2013, the European Environment Agency issued a scathing report in which it laid the blame for the loss of tens of thousands of lives on the failure of political leadership to embrace the precautionary principle.

Europe has failed to learn the lessons from many environmental and health disasters like Chernobyl, leaded petrol and DDT insecticides, and is now ignoring warnings about bee deaths, GM  food and nanotechnology, according to an 800-page report by the European Environment Agency.

Thousands of lives could have been saved and extensive damage to ecosystems avoided if the "precautionary principle" had been applied on the basis of early warnings, say the authors of the 2013 Late Lessons from Early warnings report published on Wednesday.

Those smug Europeans. Only our politicians are no better in heeding the precautionary principle.

"The precautionary principle or precautionary approach states if an action or policy has a suspected risk of causing harm to the public or to the environment, in the absence of scientific consensus that the action or policy is [not] harmful, the burden of proof that it is not harmful falls on those taking the action. ...The principle implies that there is a social responsibility to protect the public from exposure to harm, when scientific investigation has found a plausible risk. These protections can be relaxed only if further scientific findings emerge that provide sound evidence that no harm will result."

The three climate scientists interviewed for The Guardian tipping points article, Timothy Lenton (Exeter), Ricarda Winkleton (Potsdam Institute), and Katherine Suding (Colorado), agree that governments need a tide change in their attitude to the threats of this climate breakdown.

“I think a precautionary principle probably is the best step forward for us, especially when we’re dealing with a system that we know has a lot of feedbacks and interconnections,” agrees Suding.

“These are huge risks we’re playing with, in their potential impacts,” says Lenton. “This is yet another compulsion to get ourselves weaned off fossil fuels as fast as possible and on to clean energy, and sort out some other sources of greenhouse gases like diets and land use,” says Lenton. He emphasises that the tipping points for the two great ice sheets may well lie between 1C and 2C of warming.

“We actually do need the Paris climate accord,” says Winkelmann. The 2016 agreement committed most countries to limit warming to 1.5 to 2C, although the US president, Donald Trump, has since chosen to pull the US out of it. Winkelmann argues that 1.5C is the right target, because it takes into account the existence of the tipping points and gives the best chance of avoiding them. “For some of these tipping elements,” she says, “we’re already in that danger zone.”

Cutting greenhouse gas emissions is not a surprising or original solution. But it is our best chance to stop the warning signs flashing red.

i.e. Jet Stream & Boreal forest etc seem to be severely affected now, even though we're still in the 1-3 degree epoch.

La Nina messes with the jet, NPoV. It's challenging for we laypeople to grasp what's really happening much less what these changes might mean over the next couple of decades.