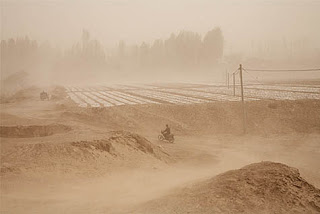 The biggest obstacle in the path of China's economic ascendancy is China or, to be more specific, the inability of the central government to effectively manage the country.

It's one scandal after another. Lead in kids' toys, melamine in the food and a lot more. However it's a series of environmental issues, and China's inability to come to grips with them, that pose the greatest threat to the country's future prosperity.

China already has a serious problem with desertification, the degradation that transforms arable farmland into useless desert. A new report says that China is losing approximately 4.5-billion tonnes of topsoil annually to erosion. From Reuters:

Over a third of China's land is being scoured by serious erosion that is putting its crops and water supply a risk, a three-year nationwide survey has found.

Soil is being washed and blown away not only in remote rural areas, but near mines, factories and even in cities, the official Xinhua agency cited the country's bio-environment security research team saying.

If the loss continues at this rate, harvests in China's northeastern breadbasket could fall 40 percent in 50 years, adding to erosion costs estimated at 200 billion yuan ($29 billion) in this decade alone.

So what does this argue for? More business with China like Chretien and Strong argue for or a more distant relationship that criticizes China's problems like Harper? It just seems strange that Liberals argue for closer trade ties and being sure Canada gets its share and then we see this as a result of rampant industrialization.

I don't see that this problem goes to the trade issue at all. Try to remember, as your side delights in reminding us when it suits their interests, that the whole globalization business was kickstarted by Reagan, Thatcher and Mulroney.

China is very fragile. In 2005 there were some 86,000 riots alone. People who try to drum up fears about China, or on the contrary tout it as the next mega power, don't realize it could implode quickly.

From what I've been reading lately, Beijing is pretty antsy about social unrest caused by layoffs and plant closings as their own economy slows. I agree that China is very fragile and I think we also overestimate India's stability. The Indian newspapers frequently report on their country's water woes and China is having to confront the same threat.

This is indeed one helluva time for countries with billion plus populations to be undergoing industrial revolution. I think that ship sailed at least a century back.

China at least has a huge tree planting scheme taking place unlike India. What is happening in China...and you are dead on MOS...is due to their huge over population. They have in place one child per family in the cities and two children in the country but it will take years before the benefit is felt. In India, there is no such program and they continue to have huge families. Their population is almost as big as China's and they will surpass China in a few more years. A. Morris