Poisoning Themselves and the Rest of Us 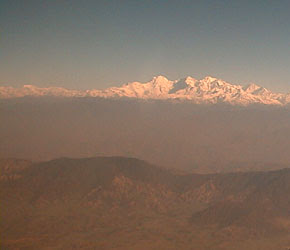 They're called "atmospheric brown clouds," huge smoglike plumes spreading over vast areas of the world's developing regions and caused by the burning of fossil fuels. From Associated Press:

A dirty brown haze sometimes more than a mile thick is darkening skies not only over vast areas of Asia, but also in the Middle East, southern Africa and the Amazon Basin, changing weather patterns around the world and threatening health and food supplies, the U.N. reported Thursday.

...When mixed with emissions of carbon dioxide and other gases blamed for warming the earth's atmosphere like a greenhouse, they are the newest threat to the global environment, according to a report commissioned by the U.N. Environment Program.

...Health problems associated with particulate pollution, such as cardiovascular and respiratory diseases, are linked to nearly 350,000 premature deaths in China and India every year, said Henning Rohde, a University of Stockholm scientist who worked on the study.

Brown clouds were also cited as dimming the light by as much as 25 percent in some places including Karachi, New Delhi, Shanghai and Beijing.

An international response is needed to deal with "the twin threats of greenhouse gases and brown clouds and the unsustainable development that underpins both," said the lead researcher, Veerabhadran Ramanathan, a professor of climate and ocean sciences at the University of California in San Diego.

One of the most serious problems, Ramanathan said, is retreat of the glaciers in the Himalaya and Hindu Kush and in Tibet. The glaciers feed most Asian rivers and "have serious implications for the water and food security of Asia," he said.

Soot from the brown clouds lands on glaciers, particularly in the Himalayas, causing them to absorb more sunlight and melt faster. The picture above, from http://www.sciencemuseum.org.uk/ , shows the sort of cloud that forms over the Himalayas.

http://ap.google.com/article/ALeqM5iiDlfwqOC5I71KgFjzSBuany-hrAD94EALKG3
Posted by The Mound of Sound at 12:54 PM

Email ThisBlogThis!Share to TwitterShare to FacebookShare to Pinterest
Labels: pollution

This is most likely a stupid question - why don't we get brown clouds here in North America?

I'm not "up" on info of these types of things & I'd like to understand better.

We do tend to get a variety of the same thing in eastern North America in the summer months but it tends to get carried out by our wind patterns. Vancouver can get a sort of brown cloud problem when the city is hit with an air "inversion" that allows smog to be penned in by the surrounding mountains. What makes Asia so much worse is that the amount of pollution in the air is greater and it's nearly permanent. Look at what they had to do to try to get Beijing bearable for the Olympics.

The world is on track to increase average temperatures by six degrees above pre-industrial levels by 2100.

Oh dandy, Troy. You really know how to make a guy's weekend. Unfortunately, barring some technological "save", I think we're toast. Leading newspapers in India carried a report this week that the Himalayan glaciers could be gone by 2035. That would pose an existential water crisis for both India and China.

The G20 economic crisis summit now underway in Washington shows just how unprepared our governments are to deal with global crises. Instead of taking a holistic approach needed to address both the immediate, credit crisis, and the looming security, resource and environmental challenges, we're going to try to muddle through one problem at a time. That guarantees we won't deal with the other unresolved problems until they grow to crisis dimension themselves.

"Brown clouds were also cited as dimming the light by as much as 25 percent in some places including Karachi, New Delhi, Shanghai and Beijing."

When I mentioned "Global Dimming" some time ago in responce to one of your blogs regarding the environment, the reaction was to question what I was talking about. I live in Asia and I know what Global Dimming is doing to the climate. People in Canada also need to take their head out of the sand and think about where those brown clouds, yelllow clouds and blue clouds end up. This fall here in Korea, the slash and burn together with the pollution for China, caused many people to end up in hospital. It has taken me two months to recover from a bronchial infection. The doctors here haven't seen anything like it before. Something diffently needs to be done about pollution. Harper knows exactly what is happening as does the Opposition. Maybe this is a great way to reduce the world's population by doing nothing. Perhpas cold and hard you say? Worse things have been conceived in the past by governments. I dislike the fact that my grandchildren will experience the worry related to whether their children will live due to air pollution. A. Morris