From Bad to Worse - Hekmatyar 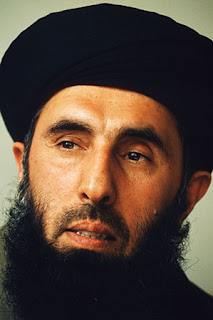 I saw a line in the Washington Post suggesting that America was looking to create ties to a rebel Afghan warlord and I said to myself, please don't let it be Hekmatyar.

KABUL, Afghanistan -- As U.S. and NATO officials revamp their strategy in Afghanistan, a renegade Afghan commander could prove central to U.S. plans to rein in the insurgency through negotiations.

Gulbuddin Hekmatyar is a 61-year-old veteran of Afghanistan's three decades of war who gained infamy for rocketing his own capital during a brief stint as prime minister in the 1990s. More recently, his supporters have carried out several devastating attacks on the Western-backed government of President Hamid Karzai.

"What's happening is the sharks are circling. Karzai is done. When you look at Hekmatyar in the current arrangement, sometimes he supports Karzai, sometimes he supports the Taliban. He'll be a wild card in this. But ultimately he's all about power," said Michael Scheuer, former head of the CIA's al-Qaeda division and an expert on Islamist insurgent movements."

Even among Afghan warlords, Hekmatyar's murderous brutality is legendary. From Warlords of Afghanistan.com:

When Masud finally defeated Najibullah in 1992, all the mujahideen factions converged on Kabul. Masud outwitted Hekmatyar and slipped into the city before him. A round robin of side-swapping, backstabbing, and massacre among Hekmatyar, Masud, Dostum, and Mazari followed. The citizens and buildings of Kabul were the big losers. The problem was that Masud could not be president as he was a Tajik, not a Pashtun. Afghan kings had been Pashtun for hundreds of years. Hekmatyar was the most powerful Pashtun, and had he not been such an evil sod, Masud might have accepted some kind of deal. In the end neither prevailed. The ISI switched support from the stalemated Hekmatyar and backed Mullah Omar, the new leader of the Taliban. Without ISI support, Hekmatyar’s men deserted wholesale to Mullah Omar, and he was a contender no longer.

Since thata was written, Hekmatyar has reconstituted his militia and joined the insurgency to fight alongside the Taliban. Like most Afghan warlords, he's an unrepentant backstabber and double-dealer. If a guy like Hekmatyar is key to an American plan to defang the Taliban, we're all in trouble.
Posted by The Mound of Sound at 12:05 PM