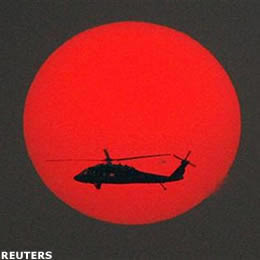 It was the cornerstone of the McCain-Palin campaign, the mantra of the Bush administration and every other delusional right-winger - "the surge is working," bringing victory to Iraq. As the Brits would say, "bollocks."

Maliki's own Iranian-leaning, Shiite Badr Organization occupies the Iraq security agencies, waiting to pounce. Muqtada al Sadr's nationalist, Shiite Mahdi Army itself lies in wait. Much of the Sunni insurgency, freshly armed and trained by the US military hovers about sullenly while their leaders seethe at being ostracized by their Shiite Arab cousins and driven back by Iraq's Kurdish state in the north. Meanwhile, Iran, Syria and Turkey glower from the sidelines.

Apparently the Kurds don't think so. The Washington Post reports that the Kurdish Autonomous Region (consider it Iraq's own experiment in Sovereignty Association) has been flying in cargo planeloads of small arms from Bulgaria. Probably the full party pack assortment of grenades, RPG rocket propelled grenade launchers, AK 47s & 74s, rounded off with some PKM and NSV machine guns. Three Hercules loads so far but who's counting?

What for? If you ask the Kurds they'll say it's so they can better fight the war on terror. My grandma, what big teeth you have! Right.

"The large quantity of weapons and the timing of the shipment alarmed U.S. officials, who have grown concerned about the prospect of an armed confrontation between Iraqi Kurds and the government at a time when the Kurds are attempting to expand their control over parts of northern Iraq.
Iraq's ethnic Kurds maintain an autonomous region that comprises three of the country's 18 provinces. In recent months, the Shiite-led central government in Baghdad, which includes some Kurds in prominent positions, has accused Kurdish leaders of attempting to expand their territory by deploying their militia, known as peshmerga, to areas south of the autonomous region. Among other things, the Kurds and Iraq's government are at odds over control of the oil-rich city of Kirkuk, which lies outside the autonomous region, and over how Iraq's oil revenue ought to be distributed.

Iraq's interior minister, Jawad al-Bolani, said in an interview that central government officials did not authorize the purchase of weapons from Bulgaria. He said such an acquisition would constitute a "violation" of Iraqi law because only the Ministries of Interior and Defense are authorized to import weapons."

What the central government, and the Americans for that matter, overlook is the Kurdish constitution. In order to keep the Kurds from splitting off when Saddam was toppled, Baghdad gave in to Kurdish demands that their own constitution be incorporated into the Iraqi constitution and, so far as Kurdish matters are concerned, it trumps Iraqi law.

Baghdad promised the Kurds a referendum to decide whether Kirkuk and its adjacent massive oil fields would be considered part of the Kurdish region but that's been scheduled and postponed twice already due to fears it would spark a war between Iraq's Arabs (Sunni & Shiite) and the Iraqi Kurds. This whole thing is just waiting to blow up.

"You could easily have a huge eruption of violence in the north," said Kenneth B. Katzman, a Middle East specialist at the Congressional Research Service in Washington. "Nothing having to do with the Kurds is resolved."

In reality, Iraq remains a mess of ticking time bombs waiting to go off. There's the internal Shiite struggle between the Badr Organization and the Mahdi Army. There's the looming Shiite versus Sunni challenge. And, of course, ticking the loudest is the Arab versus Kurd conflict. In short, Iraq remains as three, possibly four civil wars waiting to break out. Each of these issues has been around since America invaded. Not one of them has been resolved since. Not one. And there's no resolution to any of them on the horizon either.

The American military command in Iraq has become so mired, confused and hapless that it's gone on record as saying that, in the event of civil war between the Kurds and Baghdad, it will pull all US forces back into their bases and just let the games proceed.

Don't blame the Americans save for their naivete and their hubris. The roots of these apparently nascent conflicts actually go back almost a century to the Ottoman empire and World War One. They were shaped by Britain's duplicity and betrayal of the Kurds in the treaty of Sevres and the sellout, three years later, in the treaty Lausanne with Ataturk and the manner in which the Brits and the French then carved up the region.

How the Bushies thought they could knock over Saddam, toss together a democratic government and see it survive without re-opening these blood-soaked religious and ethnic disputes is astonishing.

Tying the American military presence in Iraq to the level of violence in Iraq is to shackle American foreign policy to every mistake inflicted on Iraq and the greater region by the British and French in 1920. America can't make that right and it doesn't even intend to try. Why not just declare "mission accomplished" and di di mau out of their before this all hits the fan?
Posted by The Mound of Sound at 8:20 AM

See MoS, it's all about the 7th principle of incompetence ...