Iraq, Afghanistan and Other Pipedreams 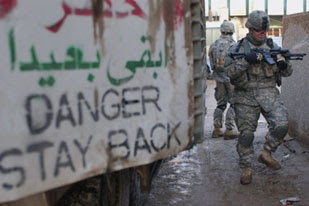 Whether a country is beset by a civil war or an insurgency, the chaotic violence usually results in a terrific opportunity for old fashioned thugs, common criminals, to prey upon the population. It's happening throughout Afghanistan and, according to The Guardian, Iraqi society has also fallen victim to rule of the gun:

"Even the judiciary cowers in fear from the criminals, or militants, who have held the country to ransom for at least three years. Many of the gunmen are filling the ranks of the so-called Sons of Iraq, the steadily growing movement credited with steadying Iraqi security.

Among the Sons of Iraq rank and file are former al-Qaida insurgents who once used to be the US military's targets. At a Sons of Iraq pay day at the Hamani police station, north of Baghdad, Captain James Polak from the 2/14 Stryker Brigades was supervising the handover of responsibilities from his troops to local Iraqis.

Asked how they decided which former insurgents were jailed and which were given salaries, he replied: "We have been told that anything that happened longer than four months ago is the cut-off."

The upshot is that among Iraq's judges and victims, there is a growing sense that justice will never be served.

"As judges, we are under the most critical of threats," said one Iraqi supreme court judge, who refused to be identified because of a terrorist attack on his home during the summer."

Afghanistan has shown what happens when a region or an entire people lose faith in or access to a functioning judicial system. They inevitably turn to alternatives that do offer some form of justice, even if it is arbitrary and often harsh. It's why the Taliban, in establishing a presence in an area, always seem to set up courts - civil and criminal - in short order. When they do, the locals are quick to bring their grievances and disputes for hearing and resolution and the insurgents build one more bond between their movement and the populace and drive one more wedge between those same civilians and their government.

It's another reason why Iraq, like Afghanistan, isn't suited to the sort of instant democracy envisioned by Bush, Cheney and the neo-cons. You can't create a nation without a functioning judiciary and you can't put a system of laws and courts in place without an effective security and law enforcement system which, in turn, you can't accomplish until basic political authority is consolidated and viable.

In Iraq, it's the Kurds - the only pro-Western group in the bunch - who steadily undermine the notion of central government in Baghdad. If Maliki can't reach some settlement with the Kurds that falls short of total capitulation to their demands, what hope can he have for dealing with his enemies among the Sunni Arabs and the nationalist Shiites of al Sadr? In Afghanistan, Karzai has managed to establish himself as little more than the mayor of Kabul. The rank corruption in his security services and judiciary steadily drives the rural population into the arms of the insurgents.

We pursue these notional goals of democracy at our peril. It's not going to happen - not in Iraq, not in Afghanistan - at least not now and probably not in our lifetimes. Democracy can't be created in a political vacuum, it can't be thrust upon people who don't understand it enough to be willing to fight for it. Look how long it took us to get from Magna Carta (1215) to the form of democracy we enjoy today. Some women (those who qualified) got the vote in 1918 but it wasn't until 1948 that we purged the last property qualifications from the right to vote in Canada. That's just 60-years ago.

So, if we in the West tie our military campaigns in these countries to achievement of democracy, we're not helping anyone, ourselves included. In the case of Iraq, if it is to be held together, it will need the sort of leader who can do what it takes to impose central rule throughout the country. At the end of the day, that someone may look an awful lot like the guy we just toppled.
Posted by The Mound of Sound at 8:31 AM

“It's another reason why Iraq, like Afghanistan, isn't suited to the sort of instant democracy envisioned by Bush, Cheney and the neo-cons.”
I am surprised MoS. Bush and Cheney actually envisioned a democracy for Iraq? I thought it was all about oil. Saudis and Egyptian do not have democracy either and they are Bush and Cheney’s buddies. What is the role of democracy in all this?

Hi LD. I think the "role of democracy" you've posited is a thinly veiled justification for retaining a security presence in both countries. It's where America's geopolitical interests inevitably part company with the interests of their allies which explains why, one by one, America's coalition in Iraq has dissolved.

You could well be right. Iraq has oil a plenty and Afghanistan is the essential eastern corridor for pipelines out of Turkmenistan and the Caspian Basin. Factor in that they both border Iran. Then look to the competitive threat to Western oil flows from the region poised by China's shared border with Afghanistan and Pakistan and its own quest to lock up its share of the Caspian resources along with a pipeline route through Balochistan (southern Pakistan) to access Iranian resources. There are so many agendas being served by these occupations that it can give you a headache trying to match them up with individual policy decisions. Madness.