Now the Culture Wars are All Republican 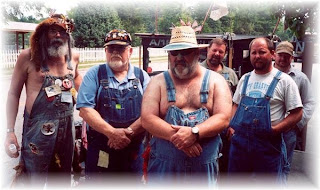 Nixon started it, the culture wars that have waged incessantly ever since, becoming the mainstay of Republican political power. By embracing the whitebread anti-civil rights south and Christian fundamentalists, the Repugs had an unbeatable team so long as they could snag enough of the independents. The traditional conservatives went along with it so long as it delivered results.
This coalition of the damned worked pretty well during the Reagan years. It allowed the Republicans to seize control of Congress during the Clinton years and, with a little help from corrupt election officials and a slightly less corrupt court, it was enough to hand Bush two terms in the White House.
It was real, ugly "in your face" politics, the politics of division, of us versus them, of the godly versus the heathen. It floated atop an undercurrent of racism, xenophobia, paranoia, ignorance, zealotry and anger. In essence, it was diseased, what Kevin Phillips called the American Theocracy.
Bush/Cheney's greatest contribution to the United States and its people might just be in discrediting their own movement. They got liquored up on power, opened the throttle full bore, took their feet off the brake, and ran straight into a wall, a wall of their own making. The Republican Party was reduced to rubble and miscellaneous heaps of trash by the hillbillies and cowboys, night riders and yahoos who had come to rule the party.
Now the culture wars that the Republicans played so successfully for so long are moving in-house. Traditional conservative Republicans want their party back. They know their path to recovery doesn't travel through Wasilla or Biloxi. They know the way back doesn't include a stopover in the pews of fundamentalist megachurches.
The Republican Party is at a fork in the road. One side leads back to traditional, pre-Reagan conservatism. The other, shorter road, leads to a cliff at the end of which the Party plummets into the abyss of ignorance and religious fundamentalism - in other words into obscurity. Between now and 2012 you could just see a culture war rage within the Republican ranks. I think traditional - educated, sophisticated and relatively secular Republicans - aren't willing to follow any more George w. Bushs or Sarah Palins. I'm betting that they and their money will stay home, some may even defect to the Democrats, if their party yields to another clown prince.
Posted by The Mound of Sound at 10:20 AM