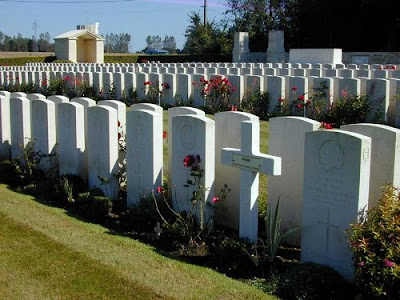 Yes it's good to remember our war dead but only when that remembrance is stripped of all sentimentality, boosterism and attempts to venerate death in war as somehow noble.

It's no accident that, when we make movies and documentaries about our wars, it's all the battlefield stuff. It's from the meat grinder of war that we seek to extract images of bravery, determination and noble sacrifice.

War is the ultimate expression of mankind's flaws, the pinnacle of our failure. Maybe that's why there's so little focus paid to how we get into wars - our arrogance, conceit and our blunders - and so much focus placed on carnage.

Remembrance Day is a lousy interface between the civilian population and the martial aspect of our government and modern society. It's a neatly packaged ritual. You buy a poppy and maybe you turn on the TV on the 11th to see the old folks gathered, wreaths being laid, trumpets and bugles played, rifles and cannon fired and maybe even a flypast. Then you take the poppy off and tuck it all away until next year.

Chris Hedges is a veteran American war correspondent who covered conflicts large and small around the world for two decades. A preacher's son, he took a Masters of Divinity from Harvard but somehow found his way into journalism. His background, however, left him with a rare insight into war and society which he describes in his book War is a Force that Gives Us Meaning.

The rush of battle is a potent and often lethal addiction, for war is a drug, one I ingested for many years. It is peddled by mythmakers - historians, war correspondents, filmmakers, novelists, and the state - all of whom endow it with qualities it often does possess: excitement, exoticism, power, chances to rise above our small stations in life, and a bizarre and fantastic universe that has a grotesque and dark beauty. ...War exposes the capacity for evil that lurks not far below the surface within all of us. And this is why for many war is so hard to discuss once it is over.

Patriotism, often a thinly veiled form of collective self-worship, celebrates our goodness, our ideals, our mercy and bemoans the perfidiousness of those who hate us. Never mind the murder and repression done in our name by bloody surrogates from the Shah of Iran to the Congolese dictator Joseph Mobutu, who received from Washington well over a billion dollars in civilian and military aid during the three decades of his rule.

War makes the world understandable, a black and white tableau of them and us. It suspends thought, especially self-critical thought. All bow before the supreme effort. We are one. Most of us willingly accept war as long as we can fold it into a belief system that paints the ensuing suffering as necessary for a higher good, for human beings seek not only happiness but also meaning.

The soldier, neglected and even shunned during peacetime, is suddenly held up as the exemplar of our highest ideals, the savior of the state. The soldier is often whom we want to become, although secretly many of us, including most soldiers, know that we can never match the ideal held out before us. And we all become like Nestor in "The Illiad," reciting the litany of fallen heroes that went before to spur on a new generation. That the myths are lies, that those who went before us were no more able to match the ideal than we are, is carefully hidden from public view.

"...While we venerate and mourn our own dead we are curiously indifferent about those we kill. Thus killing is done in our name, killing that concerns us little, while those who kill our own are seen as having crawled out of the deepest recesses of the earth, lacking our own humanity and goodness. Our dead. Their dead. They are not the same. Our dead matter, theirs do not.

"When our own nation is at war with any other, we detest them under the character of cruel, perfidious, unjust and violent: But always esteem ourselves and allies equitable, moderate, and merciful. If the general of our enemies be successful, 'tis with difficulty we allow him the figure and character of a man. He is a sorcerer: He has a communication with daemons; as is reported of Oliver Cromwell, and the Duke of Luxembourg; He is bloody-minded, and takes a pleasure in death and destruction. But if the success be on our side, our commander has all the opposite good qualities, and is a pattern of virtue, as well as of courage and conduct. His treachery we call policy; His cruelty is an evil inseparable from war. In short, every one of his faults we either endeavour to extenuate, or dignify it with the name of that virtue, which approaches it." - David Hume, "A Treatise on Human Nature, 1740"

"But in mythic war we imbue events with meanings they do not have. We see defeats as signposts on the road to ultimate victory. We demonize the enemy so that our opponent is no longer human. We view ourselves, our people, as the embodiment of absolute goodness. Our enemies invert our view of the world to justify their own cruelty. In most mythic wars this is the case. Each side reduces the other to objects - eventually in the form of corpses.

"We often become as deaf and dumb as those we condemn. We too have our terrorists. The Contras in Nicaragua carried out, with funding from Washington, some of the most egregious human rights violations in Central America, yet were lauded as 'freedom fighters.' Jonas Savimbi, the rebel leader the United States backed in Angola's civil war, murdered and tortured with a barbarity that far outstripped the Taliban. The rebellion Savimbi began in 1975 resulted in more than 500,000 dead. President Ronald Reagan called Savimbi the Abraham Lincoln of Angola, although he littered the country with land mines, once bombed a Red Cross-run factory making artificial legs for victims of those mines, and pummeled a rival's wife and children to death.

"The moral certitude of the state in wartime is a kind of fundamentalism. And this dangerous messianic brand of religion, one where self-doubt is minimal, has come increasingly to color the modern world of Christianity, Judaism, and Islam. Dr. James Luther Adams, my ethics professor at Harvard Divinity School, used to tell us that we would end our careers fighting an ascendant fundamentalist movement, or, as he liked to say, "the Christian fascists." ...There is a danger of a growing fusion between those in the state who wage war - both for and against modern states - and those who believe they understand and can act as agents for God.

"When Ernie Pyle, the American war correspondent in World War II, was killed on the Pacific island of Ie Shima in 1945, a rough draft of a column was found on his body. He was preparing it for release upon the end of the war in Europe. He had done much to promote the myth of the warrior and the heroism of soldiering, but by the end he seemed to tire of it all:

"But there are many of the living who have burned
into their brains forever the unnatural sight of cold dead men
scattered over the hillsides and in the ditches along the high rows
of hedge throughout the world.

Dead men by mass production - in one country after another -
month after month and year after year. Dead men in
winter and dead men in summer.

Dead men in such familiar promiscuity that they
become monotonous.

Dead men in such monstrous infinity that you come to
almost hate them. These are the things that you at home need
not even try to understand. To you at home they are columns
of figures, or he is a near one who went away and just
didn't come back. You didn't see him lying so grotesque
and pasty beside the gravel road in France.
We saw him, saw him by the multiple thousands.
That's the difference.
Posted by The Mound of Sound at 8:16 AM

"Patriotism" is the opium which is given in large quantity to soldiers and public in general to perpetuate the madness of war.

Thankyou for this post MoS.
All of it's true & if only ALL people could see it this way - the way it really is.

Thank you and I'm glad you found something for yourselves in this.

The photograph is the Canadian war cemetery at Dieppe. Forty years ago I rode my motorcycle to that place. It was a glorious summer day and the graveyard was empty, save for the tenants and me. I went through the rows of headstones reading the name, rank and age inscribed on each. From all corners of Canada they came to die in that one distant place, all on that one horrible day.