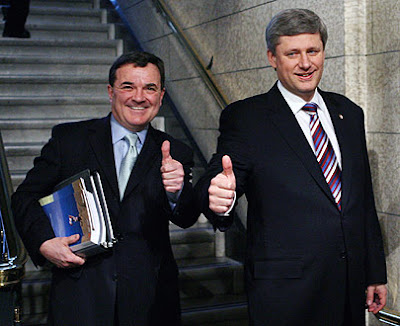 In the industrialized world, Canada stands best positioned to weather out the looming recession. And, as Linda McQuaig recounts in today's Toronto Star, we can be thankful that Harper didn't have more time to undermine Canada's fiscal strength:

"Harper's resistance to European calls for tighter regulations is ironic, since he has the luxury of presiding over a country that's been spared the worst of the financial meltdown, largely because of the Canadian tradition of tighter domestic financial regulations.

This has allowed Harper to ride out the current financial storm politically unscathed, even gaining re-election in the middle of it.

In fact, although Harper's record on this has received little attention, his government had started to push Canada down the dangerous road toward looser financial regulation.

In its first budget in 2006, the Harper government changed the rules in ways that effectively opened up the Canadian mortgage market to U.S. insurers. Finance Minister Jim Flaherty noted that these "new players" would bring "greater choice and innovation" to the Canadian mortgage market. Unfortunately, they did just that. They introduced risky products – like mortgages amortized over 40 years with little or no down-payments.

The new mortgages quickly caught on. With their lower monthly payments, they made houses seem more affordable. In reality, however, they dramatically increased the cost of a home, roughly tripling it.

Harper, a supposed economist, didn't see this recession coming. He ought to have seen it. He could have consulted his fellow economist Paul Krugman or simply read Krugman's columns in the New York Times. But no, the Boy Genius, was too busy stuck in his rancid ideology to bother looking up and noticing the obvious. He was more concerned with defunding the federal government than bolstering its strength to withstand this recession.

No matter what some Liberals may say, we ought to be very grateful indeed for the guiding hand of Paul Martin in the post-Mulroney years. We'll be reaping the benefits of that guidance in the turbulent near future. And it's all no thanks to the stooge who's running the show at the moment.
Posted by The Mound of Sound at 7:43 AM

Although trashing Harper on any subject is a worthwhile endeavour, choosing McQuaig as the spokeperson is a little like asking Anne Coulter her opinion on Liberals...

What, MoS? You mean - you mean - Harper has been playing the two-faced hypocrite all along?!?