Could Mitt Be Right? Scuttle Detroit 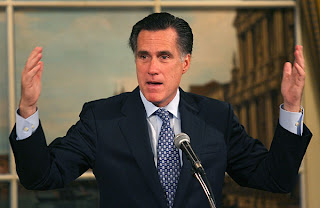 I know the dippers won't like to hear this but Mitt Romney thinks Washington should let the Big Three automakers - GM, Ford and Chrysler - fall into bankruptcy and he may just be right.

No mistake about it - the bankruptcy would be a vehicle to take the automakers off the hook for crippling labour and pension costs which grew during the boom years but now leave America's car companies at a critical disadvantage in competing with foreign automakers, including those with plants in the United States.

In 1954, my dad, George Romney, was tapped to run American Motors when its president suddenly died. The company itself was on life support — banks were threatening to deal it a death blow. The stock collapsed. I watched Dad work to turn the company around — and years later at business school, they were still talking about it. From the lessons of that turnaround, and from my own experiences, I have several prescriptions for Detroit’s automakers.

First, their huge disadvantage in costs relative to foreign brands must be eliminated. That means new labor agreements to align pay and benefits to match those of workers at competitors like BMW, Honda, Nissan and Toyota. Furthermore, retiree benefits must be reduced so that the total burden per auto for domestic makers is not higher than that of foreign producers.

That extra burden is estimated to be more than $2,000 per car. Think what that means: Ford, for example, needs to cut $2,000 worth of features and quality out of its Taurus to compete with Toyota’s Avalon. Of course the Avalon feels like a better product — it has $2,000 more put into it. Considering this disadvantage, Detroit has done a remarkable job of designing and engineering its cars. But if this cost penalty persists, any bailout will only delay the inevitable.

Second, management as is must go. New faces should be recruited from unrelated industries — from companies widely respected for excellence in marketing, innovation, creativity and labor relations.

The new management must work with labor leaders to see that the enmity between labor and management comes to an end. This division is a holdover from the early years of the last century, when unions brought workers job security and better wages and benefits. But as Walter Reuther, the former head of the United Auto Workers, said to my father, “Getting more and more pay for less and less work is a dead-end street.”

...It is not wrong to ask for government help, but the automakers should come up with a win-win proposition. I believe the federal government should invest substantially more in basic research — on new energy sources, fuel-economy technology, materials science and the like — that will ultimately benefit the automotive industry, along with many others. I believe Washington should raise energy research spending to $20 billion a year, from the $4 billion that is spent today. The research could be done at universities, at research labs and even through public-private collaboration. The federal government should also rectify the imbedded tax penalties that favor foreign carmakers.

But don’t ask Washington to give shareholders and bondholders a free pass — they bet on management and they lost.

Reality sets in. The far left will erupt in ideological fury at Romney's proposals, seeing only that they will undermine American organized labour - and they plainly will. It's a terrible blow to labour - until you consider the alternatives.

Getting Detroit running again is the city's only hope, it's auto workers' only hope. If you want to see how bad it's gotten, take a few minutes and do a search of Grosse Point real estate listings. You'll find pages of listings of gorgeous houses, Grade A prime real estate, going for half the price of a Vancouver bungalow.
Posted by The Mound of Sound at 10:53 AM

Email ThisBlogThis!Share to TwitterShare to FacebookShare to Pinterest
Labels: auto industry, US meltdown

Unfortunately the Auto Industry purports to have marketing data that says that people wont buy cars from a Bankrupt company.

"No mistake about it - the bankruptcy would be a vehicle to take the automakers off the hook for crippling labour and pension costs which grew during the boom years but now leave America's car companies at a critical disadvantage in competing with foreign automakers, including those with plants in the United States."

is simply not true. In 2005 and again in 2007 American autoworkers agreed to massive concessions drastically reducing their compensation and benefits. By the end of these new contract agreements the gap between Detroit and foreign labour costs will be virtually non-existent. See this.

As for the supposed advantages of bankruptcy, as kc points out this would probably kill their business, and as Nobel prize winning economist Paul Krugman points out, a solution that he would be fine with in good times is a very bad idea during a massive economic crisis.

There's so many scenarios of what might happen, but all of them are bitter pills.

What's not clearly explained in Romney's proposal is the idea that government would also breathe life back into the same companies. That could just be a conjuring act. In a bankruptcy, shareholders and creditors are effectively wiped out. The company could then be purchased as a going concern or its assets broken up and flogged off. Again, Romney's proposal is curiously silent on this question.

If, as you suggest Cliff, the deal already exists to bring wages and pension liabilitiese into line with other manufacturers, it certainly guts much of Romney's contentions.

As I understand it, it's the existing pension liabilities that are the real problem.

Read the link I put in my first comment. The industry passed responsibility for pension liabilities on to a fund run by the UAW. With essentially a one time lump payment they have divested themselves of all future responsibilities for older workers defined benefits.

I read those links, Cliff. Thanks. It certainly makes the case for the bailout Obama is promoting. What a bloody minefield! I think Romney's idea about a wholesale change in management is worth considering. A bailout if need be but on strict terms, not quite an outright receivership but not far off the mark either.

Any bailout should include mandates for environmental upgades. Throwing federal money at Detroit so that they can keep making SUVs would definitely be good money after bad.

B here's another link suggesting that most of the criticisms of the industry lately while once fair are actually a little out of date.

I think the bottom line is simply that the US economy and tattered social safety net cannot absorb a million people - a conservative estimate when all the various auto industry dependant jobs are calculated - losing their jobs and dropping out of the middle class right now.

Can government dictate an automaker's model line? I'm not sure it's equipped for that job. The Big Three clearly have a long way to go in reforming their outlook but I wonder whether their biggest problem isn't branding - call it brand fatigue or brand distrust. We've come to see Detroit as producing big, unreliable gas-guzzlers. They've come a long way from those days but they can't shed that image.