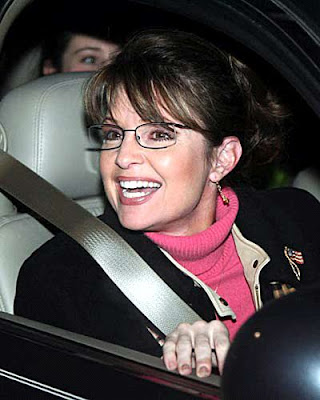 Her defenders insist she's really, really, really smart. But, by dribs and drabs, information leaking out of the McCain organization indicates Sarah Palin is - wait for it - a ditz.

Even Fox News is getting into the act with McCain campaign reporter Carl Cameron telling what he wouldn't mention before the vote. From the LA Times:

Cameron, the Fox beat reporter for the Republican presidential ticket, said he had been told by unnamed sources -- and on the condition he not report the details during the campaign -- that Palin could not name all of the countries that are part of the North American Free Trade Agreement.

He did not mention which one (or ones) she whiffed on, but there are only three: Canada, the U.S. and Mexico.

Nor, according to Cameron, was Palin aware that Africa is a continent. (Perhaps she was hamstrung by the fact that no part of that land mass can be viewed from her homestate.)

Cameron also related that the anonymous McCain aides were frustrated that Palin blew off their suggestions that she put in a little prep time before her interview with CBS journalist Katie Couric.

And this is the person John McCain tried to foist off on his nation, his people and the world as fit to succeed him and serve as president. "Country First," yeah right John.

From the day she first arrived on the McCain ticket it was plain there was something about Sarah that didn't add up. Her vice-presidential bid had been in the works for more than a year with supporters such as William Kristol (former Quayle aide, which probably ought to have been a red flag) extolling her virtues. So why didn't Sarah pick up a high school civics book and learn just a smidgen about her country, its constitution and the position she craved? Why didn't she bother to learn the basics of American foreign policy? Why did she show up in Washington dumber than a post?

There's a serious malfunction in Sarah Palin's mind, some reality disconnect. She showed so little respect for John McCain, for the Republican Party and its supporters and for the opportunity given her that she couldn't even make an effort to prepare for it.

It's no wonder McCain didn't talk to her during the campaign, something as plain as day when he didn't inform Palin, much less consult her, prior to pulling the plug on Michigan. She found out about it from a newspaper article the following morning.

There seems to be a serious effort by the McCain people to ensure that there'll be no comeback for Sarah Palin in 2012. With a factional war about to break out within Republican ranks and genuine "conservative" Republicans determined to wrest control of their party out of the hands of cowboys and yahoos, Sarah Palin has probably just shot whatever chance in hell she had of a career on the national stage.

Sarah Palin's problem is that Sarah Palin never outgrew Wasilla.
Posted by The Mound of Sound at 6:57 PM

"(former Quayle aide, which probably ought to have been a red flag)"

....a gigantic electronic red flag...flashing even

Actually, I read somewhere that Palin was foisted on McCann and she was not his choice of running mate. I would not suggest that she was intellectually challenged but ignorant due to an education system in the US that only teaches American centre history and geography courses and civic courses. It could be suggested that she represents the "average American" as most are completely unaware of politics beyond their borders.

Jan, you really need to lighten up. She does have a journalism degree. By the way, her worst failings were her ingorance of American civics, history and geography. She probably wasn't stupid as much as she was terminally lazy, too lazy to learn even the fundamentals of the job she was seeking. This is a "beauty queen" in every sense of the word.

Wam0, good to hear from you. Can you find the LPC the Obama it so desperately needs?

You don't give up do you?

The increasingly negative and down right nasty tone of your blog is just as bad if not worse than the campaign you’re providing commentary on.

You should be removed from Liblogs. Your constant negativity only serves to harm our cause as Liberals. Please stop being so petty and small.

Sorry but I have a rule never to pay attention to suggestions from anonymous churls.

That's not entirely surprising, though I'm certain that you wouldn't pay attention even if my name were revealed. Please don’t speak under the pretense that had I posted comments for the last few days using my name that you’d actually have acted differently or taken any suggestion, we both know better than that. That said let’s add honesty to my suggestions for you to work on. Negativity, dishonesty in your last comment, is that really how you’d like to be known?

What’s strange in all of this is your reaction to a simple call for you to reflect the integrity and respect that Barack Obama, who you supported, tried to promote. You cry out against our opponents for their nasty tone and yet that’s the example you’ve chosen to follow! It’s hypocrisy.

It's also interesting that you would use the term churls, it pretty much sums you up eh?

anonymous sounds a lot like a liberal4evr clone to me. Africa a country....unbelievable!! Palin was a terrible choice. If McCain can finally admit it now...well there it is, out there where it belongs.

As for the Liberal leader MoS I am leaning now but don't want to say yet cause I might change my mind. I am looking to see who can unite, bring much needed resources and is willing to build again from the ground up.

Woman at mile 0 - I'm not sure how you figure that I'm a clone of liberal4evr. I'm not promoting or condoning the tactics and policy of the McCain/Palin ticket as liberal4evr was. You must be sadly confused. I invite you to read my remarks in the comments of the “McCAIN CONCEDES!” post to gain actual insight on the message I’m trying to promote.

For months we were all outraged at the downright nasty tone of the US federal election and we all bore witness to the damaging effect that negativity had. Yesterday we gathered around our televisions and watched Barack Obama call for healing between both sides. A call for respect from a man we all respect. Instead we now see an increased level of negativity from this individual. What do we gain from this bloggers devotion to continue down a path which divides as we Liberals begin a process of renewal? If this blogger instead chose to build on the positive outcome of Obama’s election to start a positive discussion about our future imagine the contribution he could be making!

My call is for healing. My call is for a return to respect and decency. Dion said it best when he said that we are stronger together. My call is to end this highly negative and divisive discourse.

I’ll repost a portion of what I had written in response to this bloggers post “McCAIN CONCEDES!”

You've shown no humility in your writing, no humility in this victory. It is small of you. John McCain was handed the defeat he deserved, yet you still cry out against him. Instead of taking the high road in victory you’ve chosen to join a dead campaign in the gutter to fling more dirt. What of the respect Obama spoke of? You claim to support Obama but reject his call to come together, to heal the wounds and once again respect all others? This is no way for a Liberal to act.”

Even then, I was shot down in my call for a return to the high road. Woman at mile 0 please go back and see what was said in those comments. On review I am confident that you’ll find that it is not me who is acting like the divisive character Liberal4evr…But I’ll leave it up to you to decide who better fits that role.

Last time I listened to the news this "mudslinging" you are ranting about was mainly coming from the McCain camp. Learning from mistakes is key to moving forward. Seems a pretty simple concept to me. Putting a bag on the head and refusing to see any daylight is not really helpful.

anon, how about, as I have suggested to others, you take the time to post to your own blog? That will save us all some time. Mound, keep at it. Nothing wrong with saying what is so plainly obvious. There is nothing hate-mongering or anything of the like with this blog. There are times when one does not mince words. Palin was lazy, and there is nothing wrong with lambasting that. Let's give the boot to mediocrity.

Woman at mile 0 - No one has denied that McCain’s campaign was mainly responsible for the negative tone of the US election. While I doubt I said anything to the contrary I’d be happy to correct myself if you’d show me where I did. I’m not sure what you meant by your comment about putting a bag on one’s head. Perhaps I’m just unable to comprehend your message since I’ve been to busy ranting.

Liberal renewal and growth can never happen if we’re seen as a group of bitter individuals who lack humility. How in the world can we promote inclusion when this is the image we put forward?

Perhaps the Mound of Sound could take a moment and visit your blog, woman at mile 0. You set a fine example for all Liberals.

n - "Let's give the boot to mediocrity." The boot has already been given.

Anon....The bag comment was in regards to McCain and Republicans...if they were to refuse to examine (bag on head) what caused the problems in their party/campaign they would not be being pro active for the future. From what I can see they do not appear to be doing this though. They are trying to be somewhat reflective and realistic. It's important to do that when you lose and it's the same thing Liberals across Canada are doing right now.

Palin may be dumber than dumb but it's time to shut up about her....it's over. The McCain camp are just spilling the beans to whom ever will listen to exonerate themselves from their failure. McCain is the person who chose her as his VP....he is person who is most dumber than dumb and still acting ruthless. A. Morris

I agree in the end it was McCain's choice and his responsibility. I would be interested to know how much control he had though. When things aren't going well things leak out (e.g anonymous Liberal insiders). Obama spent a lot more time and resources vetting his choices and made a better decision.

If Palin runs for President in 2012, at least she has name recognition going for her... she just has a lot of cramming to do for the next few years