Hurry Up or Get Out - Karzai 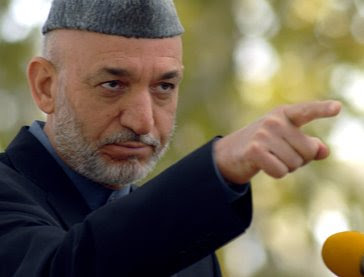 Oh poor Hamid. He's getting so desperate you can never tell what will come pouring out of his mouth from one day to the next. Here's the latest from our man in Kabul, President Karzai himself, from the Toronto Star:

It appeared to be the first time Karzai has called for such a deadline to defeat Taliban militants and raise a stable and competent Afghan security establishment.

"If there is no deadline, we have the right to find another solution for peace and security, which is negotiations," Karzai was quoted as saying in a statement from his office.

Now wait a minute, Hamid. You want us to promise to destroy the Taliban by, oh I don't know, let's pick next June 17th and, if we don't eliminate them by then, you'll be free to negotiate a settlement.

I've got an idea. How about we make the deadline midnight, December 31, 2008? That deadline is about as meaningful as any other we could possibly set. Then, starting on New Year's Day we'll begin packing up our tanks and trucks, artillery and, most important of all, our soldiers so we won't get in the way of your negotiations. After all, the Taliban have said repeatedly they won't negotiate while we're still in your country.

Oh yeah, as for that "stable and competent Afghan security establishment" well we'd better just let that one slide. You can't even hope for a stable and competent security service if it works for a thoroughly corrupt government, something you haven't even tried to clean up.
Posted by The Mound of Sound at 9:54 AM

We're done in Afghanistan. Time to go home. Harper has us stuck in the mud for another few years, but that's not going to make a whit's worth of difference to this clusterfuck of hopeless incompetence and misguided intentions.

At least the Americans are talking to Hekmatyar. He may be the most duplicitous, brutal, cutthroat warlord but he is Pashtun and he might just do our bidding if we hand him the keys to Karzai's office. In any case he doesn't seem to have any great axe to grind with the West.