Harper Hiding From His Own Shadow 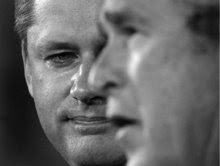 Poor, poor Steve. He has been overtaken by events, forced to put his far right ideology back into the toybox. The great crusade to put the big R Republican stamp on Canada has faltered.

The last thing Harper wants right now is a lot of ankle-biting by the legendary "grass roots" of Prestone Manning's Reform Party. That little travelling bible tent has been all folded up and trucked away. The Harper dream of a Canadian "Reagan era" has ended.

At moments like this I get out my copy of Steve's speech to the secretive and once immensely-powerful Council for National Policy, a group of top-level, far right American ideologues. In June, 1997 the group met in Montreal and invited the then vice-president of the National Citizens Coalition, Steve himself, to be their guest speaker. That speech showed the true face of our Furious Leader in all its ugliness.

As if needing to make the point that he wasn't one of us, that he was ideologically one of them, Steve wasted no time in denouncing his own country as a "Northern European welfare state in the worst sense of the term, and very proud of it."

"Canadians make no connection between the fact that they are a Northern European welfare state and the fact that we have very low economic growth, a standard of living substantially lower than yours, a massive brain drain of young professionals to your country, and double the unemployment rate of the United States.

"In terms of the unemployed, of which we have over a million-and-a-half, don't feel particularly bad for may of these people. They don't feel bad about it themselves, as long as they're receiving generous social assistance and unemployment insurance."

That last line, there it was, Steve's seething contempt for the Canadian people who, after all, were only looking for handouts, slackers perfectly content with unemployment. There were plenty of other anti-Canadian slurs in that speech and by its very wording it's obvious that Steve was plenty happy to stand apart - and above - what he held out as the very low Canadian public.

Poor, poor Steve. Look what's happened. Our low growth, lower standard of living and every other aspect of the Liberal policies Steve so gleefully denounced have left the Canadian government and our financial institutions the absolute top, the very envy of the G20. Harper saw backwardness instead of prudence. Our federal government is rated the least likely to default and our banks are the most solvent in the industrial world. And Steve can take virtually no credit for any of it. It was all bequeathed to him when he became prime minister.

I wonder what Steve must think today of his American Idol, George w. Bush? It must be like the hero-worshipping kid brother catching his older brother smoking crack in the basement.

Steve, who made it his life goal to utterly purge the notion of anything progressive from the Conservative Party, has failed before he even got started. He must find it strange indeed to be perched so comfortably today atop this great Northern European welfare state.
Posted by The Mound of Sound at 7:13 AM

Preschool, you're utterly delusional not to mention just a bit incoherent. If you can't address people respectfully, and you can't, then you're binned. Bye, bye.