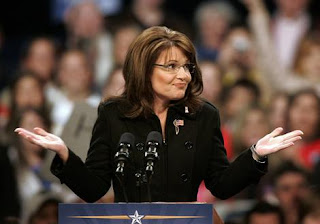 Palin, who probably doesn't know that Muslims, like Christians and Jews, worship the same, Old Testament God, says a little Divine inspiration is all she needs. From The Guardian:

"If there is an open door in [20]12 or four years later, and if it's something that is going to be good for my family, for my state, for my nation, then I'll plough through that door," she told Fox News on Monday night.

"Show me where the open door is. Even if it's cracked up a little bit, maybe I'll plough right on through that and maybe prematurely plough through it, but don't let me miss an open door."

So, to recap. An open door is all she'll need to plough straight through but if the door isn't opened, she'll "prematurely" plough through anyway. The good news - we've got two more years before the campaigning begins for the 2012 race. The bad news - all we've got is just two more years.

I'm bettin' there are a lot of Republicans who aren't real keen on giving Sarah Palin another chance to destroy their party's prospects of retaking the White House. Then again, Hillary versus Sarah in 2016? Where do you get tickets? Sign me up, you betcha!
Posted by The Mound of Sound at 4:00 PM

"moose assassin" - LOL. And true too.

This woman is NEVER going away barring something major to alienate her from the Repubs & society in general. And even then I'm not so sure about that.

She's become addicted to all the attention, hype, & cacophony of her own self-importance brought about by the media. An absolute glutton. So if something were to happen in the political arena she'd probably end up hosting some kind of "fluff" talk show on Fox or something very similar. Maybe God will make that door a steel one that no matter how hard she pushes she can't ever get through. That's my prayer. ;)

If Gawd shows her the door and it happens to be on a 747 cruising at 30000 ft, I'll renounce my atheism and believe again.

Of course you'll become a believer again Mike. You'll probably be right behind her when you push her out the door!