Embracing Reality - Global Warming and Other Challenges We Must Confront 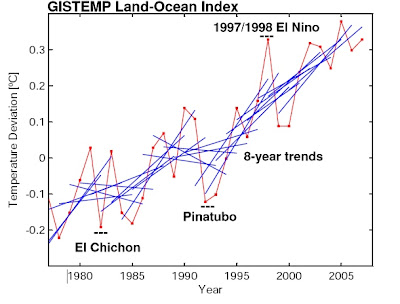 Which leads one to think... Did world bankers fall victim to forces trying to engineer the economic collapse for the oil industry?

One can't trust the oil industry as far as one can throw them.

Finally! You are beginning to address the most urgent problem of this world......"Over Population"!!. It needs to be screamed from the mountain tops but my, my, my....most people don't want to offend the religious and adress the grown up fairy tale. A. Morris

Over population isn't the problem, consumption is.

Here's a little bit of news I thought you might find enjoyable!

Dan, I understand your point but it only operates on a theoretical level of "if" we could only restructure all individuals' consumption levels. We'll slaughter each other off in the millions long before we ever get that degree of voluntary self-sacrifice. I can't think of a government on this planet that could enforce that policy effectively.

Look at it this way. Those who aren't the problem - say the people of the Sahel - are on subsistence as it is. Those who are the problem - those of us from the industrialized world have too much political clout to tolerate it. Anyone who tried would be thrown out of office.

No, unfortunately I think we would go for the population remedies long before we accept any meaningful consumption solutions. I genuinely wish I didn't believe that.

And, Fish my man. Very interesting story, thanks. Somehow I don't see Dick Cheney ever sharing a room in the Greybar Hotel. We can only dream.

I agree it's unlikely he'll ever see the inside of a prison cell (for crying out loud he shot a man and got away with it!), but the indictment alone is a good sign!

So Scruffy dan, who brain washes people into "over consumption"? I also know many people including myself who do not over consume. Big business is always telling people they must "have" but there is very little education aimed at the public to see through the ads...nor does government want to upset the apple cart. A. Morris

I don't know that anyone in particular brainwashes us into over-consumption. It strikes me that it's an aspect of human nature that corporations have certainly exploited. The great American writer (and Republican) Lewis Lapham suggests that the rot truly set in during Nixon when wealth came to be equated with virtue.

Your take on government's reticence to intercede is spot on, AM. Like all pioneer countries we've been fixated on the notion that growth is not only good but essential for a healthy society and a sound nation.

Unfortunately, once we've passed the earth's capacity for renewal we are very much trying to spend our way out of debt by clinging to economic models based on growth. Placed in that context it sounds stupid, even mad - and it is madness but we've been embracing the notion for so many generations, centuries even, that we don't see and don't want to see that.