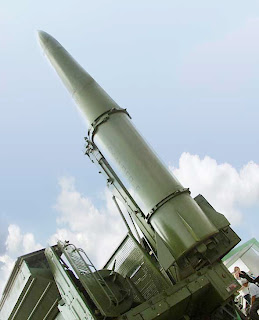 Russian president Dmitri Medvedev has served notice that he'll be a problem to be dealt with by Obama.

Instead of congratulating the American president-elect, the Russian president announced that his country would reverse its decision to dismantle a missile installation in the country's Baltic enclave of Kaliningrad. Not only are the missile regiments to stay put, Medvedev announced they'll be upgraded to the newer, short-range Iskander missile system.

Medvedev didn't mince any words about his intent: “The Iskander missile system will be deployed in Kaliningrad region to neutralize, when necessary, the missile shield... Radioelectronic equipment located in the western region will jam objects of the U.S. missile defense system.”
Posted by The Mound of Sound at 7:16 AM