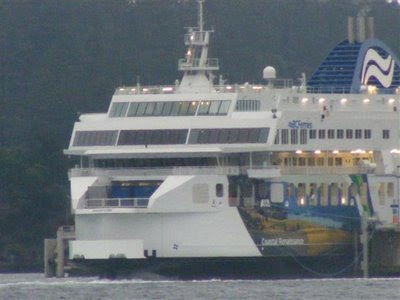 The Tyee takes a grizzly paw-size swipe at British Columbia's right-wing newspapers this week. It concerns the scam pulled by the Campbell faux-Liberals in 2002 to prepare the public for the transfer of B.C. Ferries to a private company.

A government memo marked "confidential" lays out the government's intricate plan to pitch the scheme to what they knew would be very wary voters.

An appendix to the strategy details the things the public might dislike about the change. There would be "public concern about steep increases in fares and cuts in service," it said.

"British Columbians are proud of and feel a sense of ownership in the ferry service," it added. And there would be "Public concerns about foreign ownership, especially by a U.S. company," a concern for which the spinners were yet to come up with a planned response.

And then there was the question of accountability: "Concerns that an independent BCFS will no longer be accountable to ferry users and the voting public at large." At least in the old days the public knew who to blame when something went wrong.

And who was the chief Judas goat? Why noneother than Mr. Integrity himself, then BC Ferries board chairman David Emerson. Cough, sputter, gag.

Even before the announcement, the communicators would be preparing the public for what was coming. "Leading up to announcement, arrange for David Emerson and other Board members to 'publicly muse' through briefings with trusted reporters about the Wright Report findings and the challenges facing BC Ferries."

Emerson and B.C. Ferries board members were to "place calls to key media" in the two weeks ahead of the announcement.

And who were the "trusted reporters" mentioned in the report? Well, they weren't named but the Tyee story noted which media ran inside stories prior to the public announcement - outfits like CanWest's Victoria Times Colonist, Vancouver Sun, Vancouver Province and Nanaimo Daily News.

Now there's nothing wrong with a reporter getting a leaked story or writing up a scoop but to be labelled, by the government, a "trusted reporter" who could be relied upon makes you wonder what else these scribes and their papers had done to establish their reliability credentials.

And yes, the public concerns the report identified were right on the money - and they've all come true.

Email ThisBlogThis!Share to TwitterShare to FacebookShare to Pinterest
Labels: BC Ferries.

Wow, I followed a link in that Tyee story about how the BC Libs now have their very own fast ferries.

I was going to make a bad pun about how the ferries must really 'suck', but decided against it. My better instincts and all that.

When it comes to BC ferries,I am too fed up to do anything more. So many meetings, and public input for years with no changes.
Just look at what they sell in their gift shop. Stuff from Ontario. Sources for coffee. Recycling? Forget it.
Idling at ferries and on ferries. Forget action on that too.
A great private business that someone should start right now would be ferry taxis for foot passengers. PCL has obstructed BC transit acting on demands for express buses from ferries.
Finally, I am fed up with BC consumers who demand to take their cars, trucks on the ferry rather than use public transit.
From SaltSpring to Victoria its only a few dollars more to drive as it is to bus,and much faster.
Same fron the north end. Same for Hornby, Denman and other shorter routes.
For 3 years at every ferry meeting I have reminded them how inconvenient it is for footpassengers to have to go up and get a boarding pass. Mothers with small children in arms and luggage have to make a trip up to the incoming ticket purchase booth to get a boarding pass for the ticket they purchased from the machine on the short run ferry.Can't you just give them out on the ferry? No, they say, we have to have the info added to the computer.
People driving off the Vancouver ferry to SaltSpring have to drive a long distance now and go all the way around to get in line for Gulf Island ferries. Where do they get these guys?
Idling on open ferries? CRD has no jurisdiction about that because its on the water.
Last trip from Vancouver, we had to wait in the cold at Ladner exchange for 40 minutes because the bus didn't wait for us. When we got to the ferry, having missed the 5pm we were told that the 7 pm was running late and we would probably not make the last ferry home. Well, couldn't you just contact that last ferry toSaltSpring and tell them to wait for us?
Last summer,a young woman heading to Galiano for her best friendswedding was told she could not get on because they were at maximum capacity.When I suggested that they could surely squeeze on one more foot passenger they said, no we don't bhave enough life jackets. Well, GIVE her a life jacket. You must have some extras here at the terminal.
I would forwarn anyone considering moving to the Island or Islands to rethink it, because your life is dependent on the ferry system . And it will take you an hour to figure it out and refigure it every too often.

Always a delight to hear a Gulf Islander praise BC Ferries. The ultimate love/hate relationship although, in your case Oem, it's clearly a lot more hate than love.

Maybe you just need a little, wooden sailboat for your trips off island. Relaxing, leisurely and carbon free.

Troy, that German ferries deal was rotten to the core. Only a privatized BC Ferries could have gotten away with outsourcing that work.

There was absolutely no reason BC shipyards couldn't have built those ships. Then that revenue would have stayed in BC and the government would have recouped a good measure of it in taxes. Not to mentioned rehabilitating our shipyards and employing hundreds of BCers.