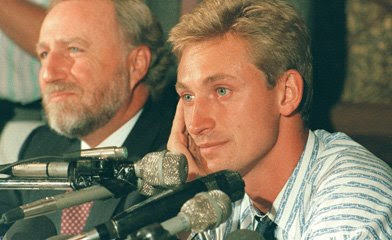 This is the guy who "owned" Wayne Gretzky. How the mighty Pocklington has fallen.

Peter Pocklington was arrested on bankruptcy fraud charges in California. He's to be charged today with false bankruptcy filings and declarations.

According to The Globe: "He filed for personal bankruptcy in California last August, just two days after a raid on his previous residence, initiated by a plaintiff in a civil lawsuit. His net worth is listed in his bankruptcy filing at $2,900 and personal liabilities at $19.7-million."

The gist of the charges appears to be claims that Pete didn't quite disclose all his assets. Oopsie!
Posted by The Mound of Sound at 12:50 PM

Email ThisBlogThis!Share to TwitterShare to FacebookShare to Pinterest
Labels: Pocklington