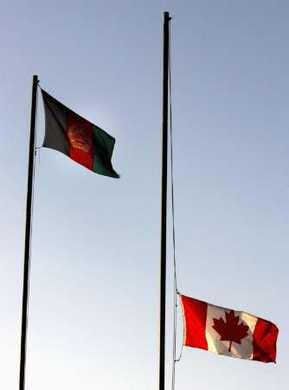 There's a sickening futility to this carnage. It's death delivered by remote control, the enemy unseen or even long gone. It speaks to who actually controls the territory - those who are able to plant and conceal these explosives with impunity.

I'm glad that we are "winning" there and that Iggy supported the extension of this farce...

Do we have a count of how many Canadian military members we lost during strictly peace keeping missions?

There was Maj. Paeta Hess-von Kruedener who was killed by Israeli bombs on a UN watch post in Lebanon. His death was hardly honoured by our New Conservative government in comparison to glorifying the deaths of those killed in Afghanistan. But prior to that, I think most deaths were due to accidents.

It's horrible that we are losing so many young lives to such a pointless adventure designed for propaganda purposes.

Over the years we have lost a number of peacekeepers to hostile fire and explosive devices. At times our soldiers got caught in the middle of firefights and had to return fire on both sides to save themselves. This is going back a good many years but I recall an incident of that sort in Cyprus and, of course, peacekeepers are never safe from snipers and booby-traps. That said, we've certainly not had the casualty flows we see in Afghanistan but that's unavoidable when we're battling an insurgency.

What makes these deaths so heartbreaking, so intolerable is the sheer futility of them. We sent a token force to take on a job demanding many, many times their number. When it became apparent that the Taliban were resurgent, fielding far more fighters than we had foreseen we ought to have reinforced our contingent commensurately.

We sent a force of about 2,500 over there from which we fielded a battle group of 1,000 rifles. To secure Kandahar province would have required at least 15,000 combat troops and more likely something approaching 20-25,000.

Our people are so understrength that they're too busy vainly trying to protect themselves to be able to provide security to the civilians who therefore fall prey to the insurgents.

Our soldiers have done an admirable job given the paltry resources we've provided them. I wouldn't blame them one bit for feeling let down by their leadership and their government.