Hey Iggy, You Backed THIS 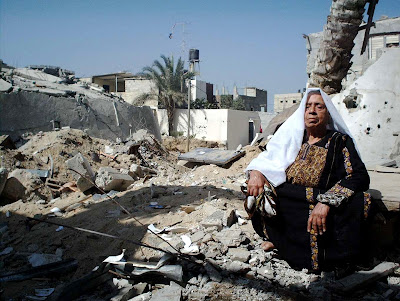 I began having grave doubts about Michael Ignatieff's fitness to lead the Liberal Party when he gave his unequivocal endorsement of Israel's attack on Gaza. It was neither balanced nor nuanced and seemed calculated to appeal to a certain voting demographic at home at the cost of abandoning traditional Liberal even-handedness. Ignatieff essentially absolved Israel of blame for its actions in Gaza.
The problem with Iggy's reckless absolutism on the Israeli war on Gaza is getting tainted with the unfortunate aftermath, being stuck with having endorsed what were, in reality, war crimes. From the Associated Press:

JERUSALEM (AP) — An increasingly disturbing picture of the Israeli army's conduct in the Gaza war emerged Friday, as new witness accounts from Israeli troops described wanton vandalism to Palestinian homes, humiliation of civilians and loose rules of engagement that resulted in unnecessary civilian deaths.
The revelations of soldier conduct over the past two days have set off soul-searching and alarm in a country where the military is widely revered. They also have echoed Palestinian allegations that Israel's assault did not distinguish between civilians and combatants, at a time when some international human rights groups contend Israel violated the laws of war.
...The Israeli government has insisted it did all it could to prevent civilian casualties, but on Thursday, the army ordered a criminal inquiry into its own soldiers' reports that some troops killed civilians, including children, by hastily opening fire, confident that the relaxed rules of engagement would protect them.
The inquiry was based on postwar testimony from a gathering of soldiers involved in the offensive, published in a military institute's newsletter and leaked to two Israeli newspapers. The Haaretz daily published additional details Friday, and the transcript of the session was obtained by The Associated Press.
...Another soldier, Ram, described what appeared to be a rift between secular and religious soldiers.
"What I do remember in particular at the beginning is the feeling of an almost religious mission," he said. He described a "huge gap" between background material provided by the army's education corps, and religious material distributed by the army's rabbinate.
"Their message was very clear: 'We are the Jewish people, we came to this land by a miracle. God brought us back to this land, and now we need to fight to expel the gentiles who are interfering with our conquest of this holy land,'" he said.
Read the entire report here: http://www.google.com/hostednews/ap/article/ALeqM5ioi_0jtO9RjMwPNRoXNCndRPRq3gD97204S80
This is the reality Michael Ignatieff finds politically expedient to ignore. I honestly don't see how that sort of person is fit to lead the Liberal Party of Canada.
Posted by The Mound of Sound at 4:56 PM

I'm scared of Harper. I'm not scared of Ignatieff. He only makes me want to vomit. Literally.

Good post! Just as he has to live for the rest of his miserable life with the thought that he supported the Iraq war, now he has to add his support for the Gaza massacre. He's absolutely clueless, isn't he?

What a total disappointment.
He is acclaimed as the Leader, it seems since no one is challenging his leadership.

To some of us, at least, he's a disappointment OEM. It's unfortunate that he didn't have to contest the leadership, to subject himself to at least a modicum of scrutiny. And so he gets the throne by acclamation without proving himself. I think the Liberal Party is going to pay dearly for that. Ignatieff is unquestionably bright but his track record reveals a judgment that is often far too narrow and almost sophomoric. To me that marks a man who is somewhat directionless and ethically adrift. The world is rapidly arriving at a point where that sort of leadership won't be nearly enough.

"reckless" is the word indeed, MoS, where Iggy is concerned.

I would also add irresponsible, intellectual sloth-driven and incompetent ...