Much Too Dumb for Prime Time 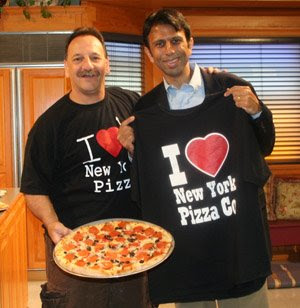 Bobby Jindal is riding to the rescue of - Rush Limbaugh!

Slimebot sparked a controversy when he first told his radio audience that he wanted President Barack Obama to fail. The remark was widely taken as unpatriotic, anti-American. It seemed to coalesce Limbaugh's supporters and opponents alike.

But Limbaugh may be the most popular Republican in the states right now. The Dems have done everything they can to raise Lardo's prominence. The Louisiana governor, however, hasn't been faring as well. The Deep South wunderkind, thought to be the first person of colour to have a shot at the Republican presidential nomination, was selected to give the Republican response to Obama's quasi-state of the union address. Obama was expectedly good. Jindal, by comparison, was sophomoric. He had a few minutes of national television exposure and he bombed.

Now Jindal seems to be grabbing for the Limbot lifeboat. While in Washington for a fundraiser, Jindal said it's okay for Republicans to want President Obama to fail if they think he's jeopardizing the country. I expect we'll hear a lot more of this sort of thing from Jindal as he gropes his way toward a run for the Republican nomination in 2012.
Posted by The Mound of Sound at 8:07 AM

Would you want communism to fail? Even Jay Leno is comparing Obama's policies to communism. I want that to fail. Watch Leno blast Mr. O's policies: