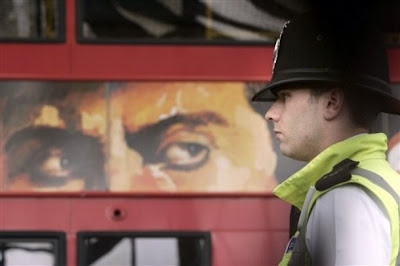 I'm not sure how I feel about this. The Guardian reports that a British police programme has identified 180 children in Britain as potential Islamist terrorists.

The Channel project, a pilot scheme established in April 2007 and run by six police forces, provides parents, teachers and youth workers with training to recognise the warning signs of "grooming" by radicals and a mechanism to report concerns over a child, or group of children, to the police. A panel of community leaders then decides the best course of action, in the most serious cases referring them to social services.

Keen to assuage fears the scheme targets Muslim children unfairly, the Association of Chief Police Officers (Acpo) last night said the aim was to steer vulnerable children away from radicalism before it was too late.

I suppose it makes sense but isn't there someone other than the police force that can handle this? There's just something about cops spying on kids that is worrying.
http://www.guardian.co.uk/uk/2009/mar/28/children-extremist-terrorism-uk-polic
Posted by The Mound of Sound at 9:22 AM

If there were to be child extrimist in my community, I would want the police to do something about it. When my children were in middle and high schiool, the police were seen around the schools when children were leaving to go home for the day. The reason.....to deter would be drug dealers from approaching childen on and around school grounds. If people can't turn to the police then who do they turn to for help....Hells
Angels, lawyers or judges?....there are a few judges and lawyers in my own family and I know how they feel about the police. Most officers do their job very well. A. Morris