A Hoax on America's Hoaxter in Chief 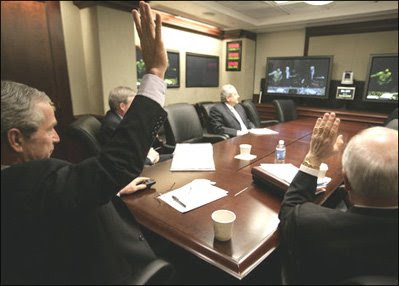 Remember the Montreal DJs who fooled Sarah Palin into believing she had French president Nicholas Sarkozy on the line? It turns out they pulled the very same stunt a year earlier on George w. Bush.

The CKOI radio duo, who call themselves the "Masked Righters of Wrong," managed to bluff their way into getting the number for the direct line to Bush in the White House situation room in 2007. They agreed not to release the tape of their stunt until after the change of administrations.

http://news.smh.com.au/breaking-news-world/canadian-djs-duped-bush-white-house-20090401-9imk.html
Posted by The Mound of Sound at 4:00 PM

Email ThisBlogThis!Share to TwitterShare to FacebookShare to Pinterest
Labels: Bush