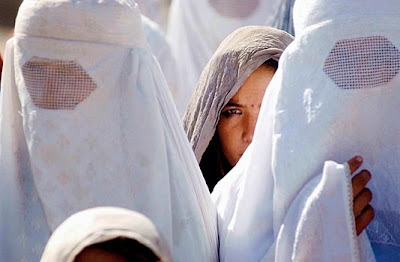 When the dwindling ranks of cheerleaders for the Afghan occupation speak out, it's generally to raise all the progress on women's rights. Right.

As The Guardian points out, with the stroke of his presidential pen, Hamid Karzai has consigned Afghan women back to the Dark Ages:

Hamid Karzai has been accused of trying to win votes in Afghanistan's presidential election by backing a law the UN says legalises rape within marriage and bans wives from stepping outside their homes without their husbands' permission.

The Afghan president signed the law earlier this month, despite condemnation by human rights activists and some MPs that it flouts the constitution's equal rights provisions.

A briefing document prepared by the United Nations Development Fund for Women also warns that the law grants custody of children to fathers and grandfathers only.

Senator Humaira Namati, a member of the upper house of the Afghan parliament, said the law was "worse than during the Taliban". "Anyone who spoke out was accused of being against Islam," she said.

http://www.guardian.co.uk/world/2009/mar/31/hamid-karzai-afghanistan-law
Posted by The Mound of Sound at 8:43 AM

Email ThisBlogThis!Share to TwitterShare to FacebookShare to Pinterest
Labels: Afghanistan, Oppression of Women

Your post caught my attention after spending the morning reading the New Internationalist issue on maternal mortality. Afghanistan currently has the second highest rate in the world.

So what benchmarks are the pro-invasion/occupation cheerleaders using to make their so-called claims of progress? It seems to me that the situation on the ground has gone from bad to worse for poor women.

An excerpt from a first hand account of a woman who died shortly after child birth from her husband who sums up the situation quite succinctly:

I should’ve still had my wife. She died a useless death. She must have been in so much pain and maybe she could have been made better, but there was no-one to help – no doctors, no nurses. This government has done nothing for poor people. They know that people in my district get cut off from the big cities when it snows but they still haven’t managed to make hospitals or clinics there.

I think no-one cares for our women. I hope that no other child is left destitute again as mine is, living without a mother in the care of an elderly grandmother. Children and women suffer most I think.

The sad truth is that the neo-cons who have been waging these wars use women's rights and welfare as a fig leaf. These same people have shown contempt for poor women in their own countries so why would they care for the welfare of those in the global south.

"Anyone who spoke out was accused of being against Islam,"

That has a familiar ring to it. As does Karzai's thirst for power.

It's our own damned fault. In the West, we've been raised to believe we can do anything, fix anything. I think that blinded us into believing our mistakes didn't matter - we could just repair them later.

We, mainly the US, screwed up Afghanistan from Day One. There was never any interest in creating the conditions necessary for the restoration of a civil society. We thought we could hold elections and paint a layer of democracy that would somehow smother all the rot beneath - the warlords, the thugs and crooks, the narco-barons. It was like putting a thick coat of varnish over dry rot.

Rehabilitating Afghanistan was a Herculean task, one that we treated with indifference, if not contempt. Our neglect simply allowed the rot to spread making our job exponentially more difficult as the years progressed.

The warlords who, all on their own, doom Afghanistan's hopes of progress were at their very weakest the day the Taliban were sent packing into Tora Bora. Like the Taliban they were exhausted from years of fruitless civil war. That was our moment to isolate and marginalize them and we let it slip through our fingers. We appointed one from their ranks to be president and he allowed the others to hold the levers of power.

Now the insurgency is morphing into a civil war, a subtle but important distinction indicated by the guerrilla force actually assuming the trappings of control and power to unseat the authority of the central government.

Back to civil war - full circle. And it's back to feudalism for the country's women and children.

We have no one to blame for this but ourselves. We refused to see that it was bound to happen and we failed to act when we had the chance.

Pretty much sums it up. Except the naive thinking that we could fix anything. Surely there were people in positions of influence who knew that a small Nato force and a can of varnish as you put it, didn't stand a snow balls chance in a warm place, of effecting a long term solution. They didn't even have to go that far back in their History books in order to have some grasp of what they were getting involved in.

I recall having mixed feelings when our government announced it's (our) initial involvement. I could sympathize with wanting to help in light of the 911 attacks, but I said at the time, if we go there, we had better be prepared to stay for a very very long time. If someone like me, with no foreign service exposure whatsoever knew this, I can only speculate why our supposedly wise leaders didn't seem to get it.

Politics is one thing, stupid politics is another.

"Eating Knife with a Spoon" Comrade. It's a post I did in September, 2007 when we still were claiming we were in this thing for an all out win. It's also how T.E. Lawrence ("of Arabia") described the challenge facing a conventional force against an insurgency.

Apparently the Canadian general who thought it'd be just dandy to send 2,500 Canadians, representing a fighting force of just 1,000, to control Kandahar province hadn't read Lawrence - or Giap or Guevera or Tito or even Caesar. He didn't understand why Hadrian had built that wall. It didn't dawn on him that, when it comes to insurgency, the Pashtu are the "Pros from Dover," probably the most experienced and successful practitioners of guerrilla warfare in the history of the planet.

Our leaders didn't understand that our side rarely wins these things and, when it does, it fights to win and follows the relatively simple, cardinal rules of counterinsurgency warfare - none of which we followed. Our commanders apparently didn't grasp that a tiny force hunkering down in garrisons and fire bases is just the opposite of "fighting to win." It's nothing more than fighting to lose while vainly treading water.

Canadian foot soldiers are uniformly great and enjoy a well-earned reputation. Canadian generals, by contrast, have had a very spotty record. You can name the good ones on one hand. There won't be anybody from Afghanistan joining their ranks.