Out of Jobs, Out of Money, Out of Ideas 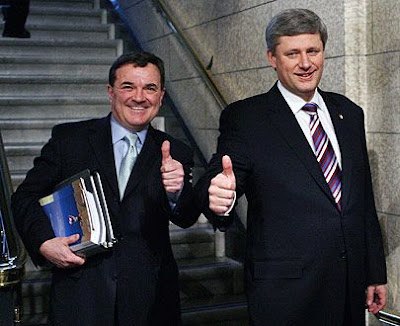 The Harper stimulus budget aimed to create a pool of jobs to cushion jobs lost to the recession. At the time, I figured it'd take until February for layoffs to exceed Flaherty's good news estimate. I might have been pessimistic, being partisan and all, but if I was out, it was only by one month.

Parliamentary budget officer Ken Page says Canada has already shed as many jobs as Flaherty promised to create in his January estimates and there's no bottom in sight. From Bloomberg Press:

Finance Minister Jim Flaherty on Jan. 27 predicted deficits of C$33.7 billion for the 2009-2010 fiscal year and C$29.8 billion for 2010-2011. Page said those figures will instead be about C$38 billion and C$35 billion for the next two years, respectively. Lower tax revenue will lead the wider shortfalls, he said.

Harper and Flaherty are causing Canada and the Canadian people no end of pain by constantly underestimating the fiscal mess we're facing. They keep planning and budgeting for a brush fire when we're being consumed by a forest fire.

In a word, they're "incompetent." The best thing they have going for them is a complacent, timid Official Opposition headed by a man of very limited political depth and unable to communicate any alternate vision when that's what Canadians really need to hear.
Posted by The Mound of Sound at 6:32 PM

But they look so confident, eager and preppy!

I was planning on returning to Canada in May. It looks like I should stay in South Korea where I can at least work. The economy here is as bad as well, but people seem have taken cuts in pay to keep their jobs unlike Canada. A. Morris

I have no advice to give, AM. This business is utterly perplexing to me. How American greed and irresponsibility was able to bring down the global economy is really astonishing. America and its unindicted co-conspirator, China.

I remember when Paul Martin waS roundly criticized for keeping a tight leash on our chartered banks. They wanted in on the American game, felt they were missing the boat. They missed the boat. The boat sank. They're more or less intact, still standing on the dock.

And, yes, Oem, they do indeed look peppy. Ordinarily that's not a scary quality but...

..confident, eager and preppy, as stars in a dog and pony show