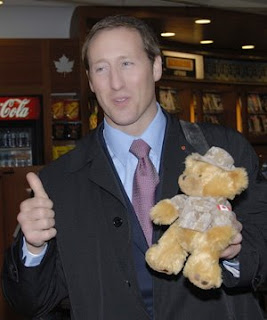 Peter MacKay has joined the "do as I say, not as I do" brigade, telling NATO partners to get more combat troops to Afghanistan on the double as Canada tries to figure out just how we're going to cut and run in 2011.

Pete, when you've announced you're leaving and your boss has told the world we're not going to defeat the enemy in any case, you must come across like more than a bit of a goof when you start talking about victory.

Said Pete: "It's security first. It's combat troops that are needed right now in Afghanistan if we are to succeed." Maybe if Pete's talking about succeeding as in getting our forces the hell out of Afghanistan, he's making some sense. But if he's talking success as in meeting our pledge in our Status of Forces agreement with Kabul to "eliminate" the Taliban and al-Qaeda, he's sounding like a bit of a buffoon.

Pistol Pete took the opportunity to get a swipe in at feckless "coalition" governments. "The future of the alliance is predicated on the notion of all for one. While countries have certain (military) capabilities, some choose to put caveats in place in Afghanistan, some are under constitutional (restrictions) or fall prey to coalition governments which lead to internal unrest. . . . But it still comes down to political will."

So let's get this right. Harper says we're not going to succeed in Afghanistan, that the failed state is in a perpetual insurgency and that the Taliban aren't going to be "eliminated" as we promised. DefMin Pete says we will succeed - if we just get a few more troops.

What a pair of idiots.

http://www.ottawacitizen.com/news/More+NATO+troops+needed+Afghanistan+McKay/1362230/story.html
Posted by The Mound of Sound at 2:30 PM

Do they ever talk to each other?
What contradictions!