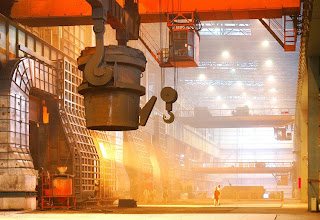 Sure that sounds implausible until you find out that US steelmakers are demanding carbon taxes on imports from Chinese steelmakers. From Reuters:

"Chinese steelmakers enjoy an unfair advantage in global trade due to the lack of enforcement of exceptionally weak pollution standards," Scott Paul, the executive director of the Alliance for American Manufacturing, told reporters in a teleconference.

What the American firms are demanding isn't merely justifiable, it's essential. Global warming is a global issue and there's absolutely no excuse for China not to be pumping a good measure of its export-driven wealth into meeting the same standards we expect of domestic producers. Carbon tariffs deliver a powerful incentive to an environmental leveling of the international playing field.

What happens when China does the same? A. Morris

How much steel does China import from the US? Does China have an equivalent of WalMart with shelves stuffed with American goods?