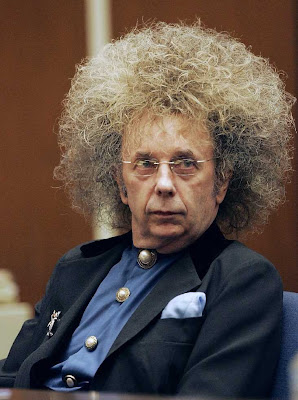 The five month long retrial of legendary record producer Phil Spector has gone to the jury. 69-year old Spector was charged with murder in the shooting death of would-be actress Lana Clarkson at his Los Angeles home six years ago.

Spector claims Clarkson shot herself. The prosecution plainly believes otherwise. The defendant has a long history of carrying hand guns and pulling them on people, including several rock stars who were working with him.

If convicted of second-degree murder, Spector faces a minimum prison sentence of 18-years. If the jury finds him guilty of involuntary manslaughter he faces two to four years in prison. If the jury acquits he'll be the luckiest defendant in an LA courtroom since O.J. Simpson. Either way, he ought to get at least a couple of years for outrageously bad hair.

The first trial ended in a hung jury.
Posted by The Mound of Sound at 6:17 PM

Email ThisBlogThis!Share to TwitterShare to FacebookShare to Pinterest
Labels: Spector

I found this at www.crimefilenews.com

Los Angeles, CA—Jurors are on a four day holiday until Wednesday when they return to Judge Larry Paul Fidler’s jury room to determine the fate of legendary record producer, Phil Spector.

What the jury does not know their Internet activities have been closely monitored for violations of the court’s order to avoid conversations along with any form of publication involving Spector and any witnesses.

Cutting edge surveillance devices have already exposed some jury Internet surfing and e-mails. The involved jurors will only have to face the music for this behavior should Spector be convicted.

Any members of the jury exposed for misconduct will have a serious problem with Judge Fidler. Considering the cost of Spector’s trial it will be understandable.