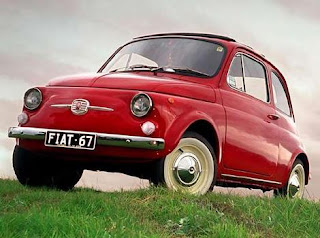 Chrysler is headed for a shotgun wedding - to FIAT, Italy's own, often wobbly, auto maker.

To give you an idea of what FIAT has gone through, here's a look at what was happening in 2002. From Business Week:

...Fiat's financial problems are hardly over. Many of them come from Fiat Auto--and those may soon belong to General Motors Corp. (GM ) GM bought 20% of Fiat Auto in 2000 for $2.4 billion and granted Fiat a put option--the right to sell GM the rest--as of January, 2004. Now GM faces a big dilemma. It's short of cash, so a big acquisition would be a serious burden. But if GM waits until 2004, it could be stuck with an even bigger lemon.

Fiat Auto has been careening downhill since GM bought its stake. It lost $1.3 billion in 2001 and is expected to lose another $1 billion this year. Management forecasts breaking even in 2003 and making a slight profit in 2004. But analysts say it'll take three years and $3 billion to $5 billion to reverse its decline.

Will Fiat sell now or later? Much depends on how much GM would pay. Investment bankers say Fiat Auto would be worth nothing if a buyer had to take on its about $1.7 billion of debt. The put terms let Fiat and GM each name bankers to negotiate a "fair market price." But time isn't on Fiat's side. "Things will only get worse for Fiat," says a board member.

Chrysler has had a tortured past with European automakers beginning with Renault in the 80's and Mercedes in the 90's. Just last year there were rumours that Chrysler owner, Cerebrus Management, would sell the US automaker to Renault. Now Mercedes is out, Renault is out, so it's FIAT.

Obama has given Cerebrus just 30-days to ink its "partnership" deal with FIAT. That pretty much gives FIAT the whip hand in dealing with the Americans.

General Motors is no better off. The White House has given what once was the very backbone of American manufacturing just 60-days to come up with a workable restructuring plan or there'll be no more federal support.

In a curious move to keep the automakers and their dealers from total collapse, there's a plan in the works whereby Washington could take over warranty obligations to purchasers of GM and Chrysler vehicles. No word yet on whether Ottawa will follow suit.

It seems inconceivable that the Big Three could turn into One Plus. What would FIAT do with Chrysler other than use it to make another flop attempt at entering the North American market? What of Windsor and Brampton and Oakville? What of every small town where the Ford, Chrysler and Chevy dealers have held sway for the better part of a century? What of Ontario?
Posted by The Mound of Sound at 6:10 AM

Where I live, the Gulf Islands I see many Japanese cars and trucks barged over from Japan.
I suppose people will do the same with the car from India.
Whatever, I am intolerant of all the vehicles on this planet.

Like it or not, Oem, you wouldn't live very long without the vehicles responsible for the goods, services and people of our society. In fact most members of society would die a slow, painful and utterly miserable death without all manner of vehicular transport. However I agree that we can readily make do with a damn sight less of it and we can also greatly improve fuel efficiency are reduce emissions for essential transport.

I'm not talking about transport of goods and services. I'm referring to transport of 1 or more people everyday in thousands of pounds of metal.
On Salt Spring, the CRD study showed that the average household makes 6.65 trips a day. What the .65 is about I'm not sure.
Every mile driven puts out a pound of carbon. The NOISE has not been measured. Nor have the choking factor of fumes or the stress for pedestrians dodging automobiles and having to be constantly on guard.
I think its stupid to drive less than a half mile to pick up a few groceries or other items.
In Port Coquitlam, downtown last week when I was there at 2pm in the afternoon, the traffic was bumper to bumper. That's dumb.
Parents and grandparents with babies and children have to walk alongside all that.
Everyone who drives should have to experience life as a pedestrian before they can renew their license or insurance.
On average, 82 people a day are injured in auto related accidents in BC.
In the US its 48,000 dead Americans each year from autos.
Iraq is building a carfree city.
We were run over by the auto companies. Unregulated use.
In China for the Olympics they had to regulate use. Most pedestrians and cyclists in China wear masks.Me too now.
Its my daily rant but I promise not too go on about it any further on your blog.
Meanwhil all our rails are eroding, thanks to the auto industry.
I woke up to the absurdity and opted out of it by using an electric bike,public transit and my thumb.
I'm like an ex-smoker. I glare at everyone who drives.
The social costs of auto use in Canada are estimated at $367 .Billion.
A million $$ to build a mile of road they say.

The Fiat patent fraud. About the Fiat hybrids: the technology double clutch with electric motor between has been stolen by a patent that Fiat Company has never wanted to purchase, but only shamelessly to copy. This hybrid solution will be the basic technology with Chrysler's electric and hybrid car program. Please give a look in my blog where the "vitality" and boldness of the Fiat planners it appears in all of evidence: http://dualsymbioticelectromechanicalengine.blogspot.com/
If the industries can afford unpunished to copy the ideas and defending it need very expensive trial, to which target need the patents? How to defend the rights of private inventors? How our young people can find intellectual courage if the economic potentates crush the rights of the single ones? Whoever is about to ask for a patent or wants to propose a proper patent to a big firm I suggest to give a look to my experience with the Fiat, to get able to operate with better adroitness. Thanks and good time to everybody. Ulisse Di Bartolomei (Not spam! Please don’t stop this comment)