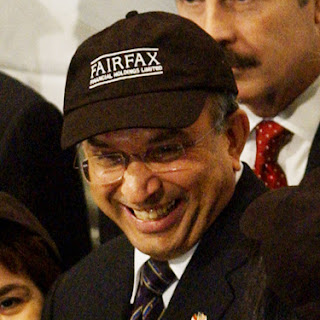 Meet Canadian businessman, V. Prem Watsa.   He's the founder, CEO, Chairman and 45% shareholder of Fairfax Financial, a Canadian insurance and investment management company.  Fairfax, in turn, owns a Connecticut reinsurance company, OdysseyRe, where Watsa is also Chairman of the Board.

OdysseyRe recently donated $1-million to Restore Our Future, a SuperPac supporting Mitch Romney.   The U.S. Supreme Court's controversial decision in Citizens United seems to make this sort of donation just dandy.   Except the U.S. also has a law prohibiting any foreign national from directly or indirectly  contributing money to influence U.S. elections.

The sticky question is whether an Canadian-owned and controlled U.S. subsidiary corporation is free to throw money into an election to help swing the outcome?   If so, can the Chinese get in on this action?   The possibilities seem endless.

Chinese are probably already making such contributions. An article on the following website puts some light on it.

With Super-Pac it will be a lot easier for China to influence U.S. elections.