Peace? It's a Dangerously Flexible Concept 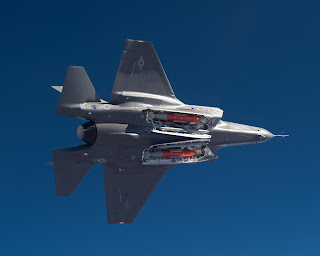 
The F-35 is the love child of America's 21st century hyper-militarism.  It's not a fighter, that's just bullshit.   The F-35 is a light attack bomber, a "penetration" warplane intended to wrap itself in stealth protection to enter heavily defended airspace, bomb some target, and get back out again.   Like all bombers, it's a "straight line" warplane.   Even the manufacturer says that.

Here's something everyone can understand.   Canada won't be attacking anyone with sophisticated air defences, say Russia or China, on our own.   So that must mean our political and military leadership envisage using our light attack bomber in conjunction with someone else or under some other military's command.  Hmm, what country might that be?   Presumably it would be a country that has the specialized support aircraft the F-35 needs  in order to operate - the United States.

Which raises the question of just what Canadians know of United States defence and diplomatic policy today, the policies we're signing on to support?  Should we maybe take a look at what we're getting ourselves in for?

We like to think the United States just wants peace, first and foremost - peace.  But, as career soldier turned professor, Andrew Bacevich points out in the latest Harper's magazine, peace to America today has taken on a much different meaning.

"Peace means different things to different governments and countries.  To some it suggests harmony based on tolerance and mutual respect.  To others it serves as a euphemism for dominance, defining the relationship between the strong and the supine.

"....A nation committed to peace-as-harmony will tend to employ force as a last resort.  The United States once subscribed to this view...

"A nation seeking peace-as-dominion will use force more freely.  This has long been an Israeli predilection.  Since the end of the cold War and especially since 9/11, however, it has become America's as well.

"...For Israel, peace derives from security, which must be absolute and assured.  Defined this way, security requires not simply military advantage but military supremacy, and threats to supremacy require anticipatory action, the earlier the better.

"...What's hard to figure out is why the United States would choose to follow Israel's path.    A partial explanation may lie with the rightward tilt of American politics that began in the late 1970s, affecting the way both Republicans and Democrats have approached national security ever since.  Among hawks in both parties, Israeli pugnacity strikes a chord.  As a political posture it can also win votes.

"...Over the course of the Bush/Clinton/Bush/Obama quarter-century, following in Israel's path is precisely what we've done.   The pursuit of global military dominance, a proclivity for preemption, a growing taste for assassination, all justified to self-defense: that pretty much sums up our m.o."

"...We have choices that Israel does not.  In disregarding those choices the United States has stumbled into an Israel-like condition of perpetual war, with peace increasingly tied to the unrealistic expectation that adversaries and would-be adversaries will acquiesce to Washington's will."

Canada could pay dearly for failing to recognize the metamorphosis of the modern American politic into a true, permanent warfare state.   Washington has adopted military force and coercion over diplomacy as its principle instruments of foreign policy.   The F-35 is a "top tier" instrument of military coercion.   Do we really want to get in on that?   If we do, shouldn't we first have a candid and honest debate on the question.
Posted by The Mound of Sound at 11:36 AM

"The F-35 is a "top tier" instrument of military coercion. Do we really want to get in on that? If we do, shouldn't we first have a candid and honest debate on the question."

Good questions, but I don't think that they will be answered by the Harperites. They do not answer questions in the house of commons and they ignore letters and emails from citizens. The Canadian prime minister is afraid of his own citizens and refuses to hold press conferences. So how on earth can a 'candid and honest debate' ever take place?

It's far worse than that, Anon. The Harperites can hardly be faulted for refusing questions the Opposition won't ask. Harper has had a free ride for years because of our hapless Opposition, Liberal and NDP. Elizabeth May can't be expected to carry it all alone.

The folks in BC elected a majority of federal Conservatives in the last election. Maybe you folks should be asking your elected representatives these questions?

@ Anon, if there's one thing I've learned from living with a Tory MP it's that my communications go unanswered. My Born Again thumper is permanently consigned to the obscurity of the Harper backbenches and is far more focused on the Rapture than questions of war or peace; supertankers and bitumen; or even the environment.

That's one of the roles our opposition is supposed to be filling, but they're not. NDP or Lib, this bunch couldn't find their collective ass with two hands.