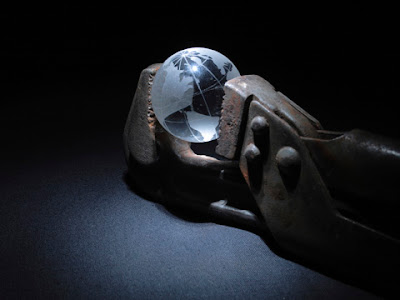 The Harper government knew of Russ George's plan to seed the waters off the Queen Charlotte Islands with a hundred tons of iron sulphate.   The Harper government also knew that this was the very sort of geoengineering experiment in ocean fertilization that is banned by  the UN's convention on biological diversity (CBD) and London convention on the dumping of wastes at sea and yet it looked the other way.

The Californian had been trying to find a place to stage his experiment but he's been turned down around the world by countries rich and poor until he got away with it in Canadian waters in July.

George even got the Haida to contribute a million dollars.   The Guardian is investigating.


The dump took place from a fishing boat in an eddy 200 nautical miles west of the islands of Haida Gwaii, one of the world's most celebrated, diverse ecosystems, where George convinced the local council of an indigenous village to establish the Haida Salmon Restoration Corporation to channel more than $1m of its own funds into the project.

The president of the Haida nation, Guujaaw, said the village was told the dump would environmentally benefit the ocean, which is crucial to their livelihood and culture.

"The village people voted to support what they were told was a 'salmon enhancement project' and would not have agreed if they had been told of any potential negative effects or that it was in breach of an international convention," Guujaaw said.

..."It appears to be a blatant violation of two international resolutions," said Kristina M Gjerde, a senior high seas adviser for the International Union for Conservation of Nature. "Even the placement of iron particles into the ocean, whether for carbon sequestration or fish replenishment, should not take place, unless it is assessed and found to be legitimate scientific research without commercial motivation. This does not appear to even have had the guise of legitimate scientific research."

..."If rogue geoengineer Russ George really has misled this indigenous community, and dumped iron into their waters, we hope to see swift legal response to his behavior and strong action taken to the heights of the Canadian and US governments," said Silvia Ribeiro of the international technology watchdog ETC Group, which first discovered the existence of the scheme. "It is now more urgent than ever that governments unequivocally ban such open-air geoengineering experiments. They are a dangerous distraction providing governments and industry with an excuse to avoid reducing fossil fuel emissions."

Harper & Co. have some explaining to do.   Why did they choose to ignore two international conventions to allow George to get away with this?   What assessment did the federal government conduct in advance of this dumping?  What assurances did it receive that the experiment was even safe much less viable?  Why did the federal government not inform the Haida of the international stance on geo-engineering experimentation?

For those unfamiliar with this character, Russ George, and his past, read this piece from the Christian Science Monitor.   And this is the guy the Harper government allowed to conduct a dubious and potentially dangerous geo-engineering experiment in Canadian waters.

The Globe & Mail is apparently giving this an environmental spin claiming it was a salmon enhancement project, not a climate change geo-engineering venture.   You can only dish up that much sophistry by completely ignoring this guy's past.   He may have dressed it up as salmon enhancement to wrangle a million bucks out of the Haida but Russ George's quest in all his ventures is to come up with a scheme to generate and sell carbon credits.

By the way, Russ George's own government has banned him from operating his ships under the American flag.

George is the former chief executive of Planktos Inc, whose previous failed efforts to conduct large-scale commercial dumps near the Galapagos and Canary Islands led to his vessels being barred from ports by the Spanish and Ecuadorean governments. The US Environmental Protection Agency warned him that flying a US flag for his Galapagos project would violate US laws, and his activities are credited in part to the passing of international moratoria at the United Nations limiting ocean fertilisation experiments

That would be typical of Harper in his stupidity of the ocean, to permit Iron Sulphate, to be dumped into our sea.

Dirty diseased fish farms, are permitted to kill off our wild Salmon.

Harper permits all kinds of atrocities, to be done to BC. He does most of his atrocities to BC himself, and with Gordon Campbell's full co-operation, when he was in office.

Wait until a massive tanker full of, dirty lethal Bitumen is dumped into the sea.

I am totally shocked the Haida people permitted the Iron Sulphate, to be dumped into our sea. They must not have done their homework. If Harper permitted this. The Haida should have been warned by, the other country's banning that procedure. They should have known, Harper could care less about, the health of our planet.

The Haida council was VERY informed re the dangers of contamination...many Haida raised objections (during Haida council meetings) to this plan but were told to be quiet by the same Haida that are now crying foul. Do not be fooled people! The council of Haida nation knew EXACTLY what was going on. Now suddenly they are acting surprised....what a farce!

Have you got a source for that, Anon? Why would they part with a million bucks for this? I will agree that there seems to be some serious backpedaling going on with the Haida president right now.

One report I found claims the algae bloom now covers 10,000 sq. kms. of the north Pacific and there are concerns it may backfire and create a huge "dead zone".

Let's not forget that this was the government which overlooked Bruce Carson's checkered past.

This government calls such people "fixers."