Billy Graham Gets His Tits Caught in the Romney Wringer 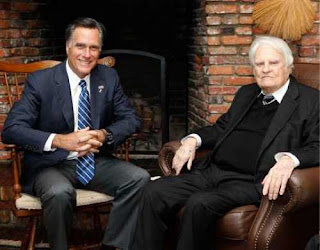 Evangelist Billy Graham must have thought he was doing Mitt Romney a big favour, inviting the Republican candidate to join him in prayer.   That seems to have backfired - on Graham and Romney.

"As Larry Sabato of the University of Virginia’s Center for Politics told the Boston Globe, for an October 13, 2012 story, "Romney is counting on evangelicals. The irony is that this is a shotgun marriage between two very different religions but they are completely dependent upon one another for victory." But even before that Boston Globe story hit the press, an emerging public relations debacle of the first order was undermining consummation of the "shotgun marriage" and now, with only three weeks before the 2012 presidential election, millions of Americans are confronted by news stories with headlines that feature the terms "Mormon" and "cult". On October 11, 2012, aging evangelical icon Billy Graham met, prayed with, and in effect endorsed presidential candidate Mitt Romney. But Graham's endorsement backfired when an LGBT rights group discovered an article on the website of Graham's flagship organization, the Billy Graham Evangelistic Association, apparently authored by Billy Graham himself, that labeled Mormonism a "cult". In a textbook case of ineffective damage control, Graham's BGEA proceeded to wipe the offending article from the BGEA website but left in place other BGEA website articles that conveyed the same message. Visitors to the Billy Graham Evangelistic Association website who use the site's search engine to search for the term "Mormon" will get six search results; the first will be a page featuring Billy Graham's own definition of what a "cult" is, an explanation that clearly encompasses Mormonism. On that page, featuring an entry from Graham's My Answer column, Billy Graham explains,


"[Cult] Members reject what Christians have believed for almost 2,000 years, and substitute instead their own beliefs for the clear teachings of the Bible. Often, they add to the Bible by claiming that the books their founder wrote or "discovered" are from God, and have equal authority to the Bible."

Founder of Mormonism Joseph Smith discovered new books of scripture that comprise the Book of Mormon which, according to the Mormon faith, augments and completes biblical scripture."

Just check the authorized, educational history of Mormons to clarify this 'cult' label.