Don't Forget, It's Mine. You May, However, Borrow Freely

I've coined a new word, Mormonstrosity, to refer to the unfit-for-prime-time, Republican presidential candidate, Mitch Romney.  My creative instincts were piqued when I read of Romney's assertion that, "Syria is Iran's only ally in the Arab world. It's their route to the sea. It's the route for them to arm Hezbollah in Lebanon, which threatens, of course, our ally, Israel."

As this map published in HuffPo illustrates, the Mormonstrosity doesn't have a freaking clue about the Middle East. 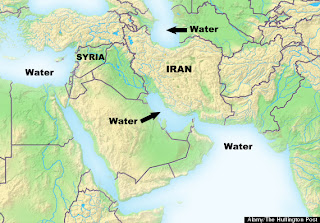 For starters, Iraq, lies directly between Iran and Syria.   And Iran's has direct access to the Caspian Sea and, of course, the Persian Gulf which is why America has three, count'em three, carrier battle groups there.

The Mormonstrosity also seems to be completely ignorant of the fact that Iran has a navy, complete with those ship thingees that go underwater, submarines.   Now the Iranian navy obviously wouldn't stand much of a chance against the massed fleet of the world's only Permanent Warfare State.   But they're not really counting on those ships so much as they're counting on these: 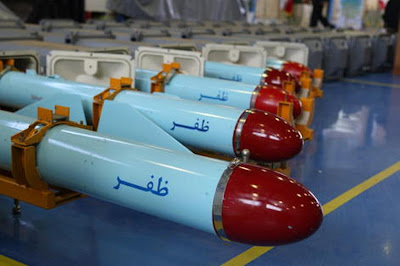 These are Iran's "Triumph" anti-shipping cruise missiles, part of a family of such weapons that are considered highly effective and easily capable of shutting down the Persian Gulf, especially the oil tanker traffic which, if disrupted, could crash the world's already wobbly economy.   They don't even have to go to sea with these things.   Fired from mobile launchers along the Gulf Coast they have plenty of range to reach out and touch everything that tries to pass.

And, while Syria may indeed be Iran's best Arab ally, the Mormonstrosity doesn't seem to understand that Iran has other, even more important allies - including newly liberated Shiite Iraq (thanks Dick Cheney), Pakistan, China and Russia.

Which brings us to the inescapable conclusion that Mitch Romney isn't fit to serve as president of the United States, not even close.

Quibble: That's actually Iraq between Syria and Iran. Saudi Arabia is to the south of Syria. You might want to fix that before the wingnuts descend.

Correct and noted, thanks.