What If We'd Had Nothing Better Than Harper and Hillier in 1812? 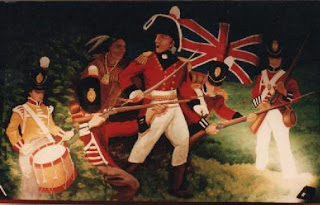 For years I've been something of student of the history of the War of 1812.   On the wall behind me are buttons from the great battles of that war including Queenston Heights, Lundy's Lane and Crysler's Farm.   Buttons from the 8th (Kings), the 41st Foot, Brock's own 49th Regiment of Foot, the Canadian Militia and other units.  On a bookcase is a Brown Bess bayonet recovered from the battlefield and other militaria.   Various Royal Engineers earthworks plans and sketches adorn my walls.

Unlike Stephen Harper, however, I have no interest in 200-year old triumphalism.   While the War of 1812 ensured I wasn't drafted for service in Viet Nam and while some brave Canadian regiments like the Voltigeurs fought valiantly, it was mainly a scrap between the Americans on one side and the Brits and their native allies on the other.   And it was war which is always a murderous business and never should be made a festive event as Harper has made this one.

When I watch Harper and his rank exploitation of this war from two centuries ago, I wonder if he's not drawn to it because of the way he and his commanders botched their own war, the one in Afghanistan.   Then I tried to imagine what might have been if we'd had a governor like Harper and a general like Rick Hillier back when Washington set out to conquer Canada?   A political leader as bombastic yet feckless and capricious as Harper tied to a military leader so full of hubris as Hillier almost certainly would have been easy meat for the American invaders.

And I might well have been drafted to fight in Viet Nam.
Posted by The Mound of Sound at 3:06 PM

Email ThisBlogThis!Share to TwitterShare to FacebookShare to Pinterest
Labels: Harper, War of 1812