The Fertilizer Tree Catches On in Africa 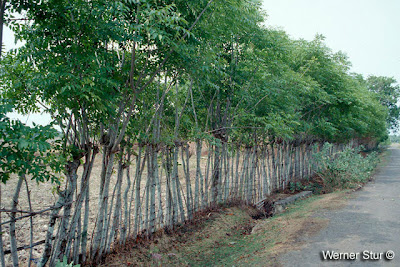 Researchers in Malawi have found a way to free farmers of dependency on expensive and destructive fertilizers.   Farmers there grow maize, corn, and their crops require large quantities of nitrogen and phosphorous from the depleted soils necessitating large amounts of fertilizer.

The 'fertilizer tree' or gliricidia, a leguminous tree, has the ability to draw nitrogen from the air and insert it into soil, changing it into a form that plants can use. "The trees also restore some amount of phosphorus to the soil," said Gudeta Sileshi, the study's lead author and the Southern Africa representative of the Kenya-based World Agroforestry Centre (ICRAF).

In addition, the leaves shed by gliricidia return organic matter to the soil, increasing its structural stability, erosion resistance and capacity to store water. Three consecutive experiments, begun in 1991 in Malawi and Zambia, showed that when gliricidia was planted in rows between maize plants, maize yields were good year after year.


The Gliricidia is a good example of the innovation we need to pursue in a world now in a state of permanent food insecurity.
Posted by The Mound of Sound at 11:55 AM

Unfortunately world hunger is still an issue, while they are likely growing that corn to feed cows.