Is America Too Divided to Continue? 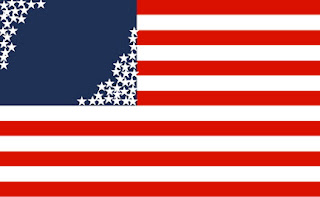 Being American these days is becoming something akin to sharing bathwater - it's no fun if you know the previous occupant is too damned dumb to wipe his butt.    A good many Americans today find themselves wondering if they're wallowing in a human gravy boat.

It was the South, today's Red States, that fought for their independence a century and a half ago.   It's taken a good long while but now there are some Yankees coming out and saying maybe it's best for Red and Blue to part company.   The internal contradictions and tensions may leave no other choice.

We’ve come to think of “blue” and “red” states as political and cultural categories. The rift, though, goes much deeper than partisan differences of opinion. The borders of the United States contain two different forms of government, based on two different visions of the social contract. In blue America, state government costs more—and it spends more to ensure that everybody can pay for basic necessities such as food, housing, and health care. It invests more heavily in the long-term welfare of its population, with better-funded public schools, subsidized day care, and support for people with disabilities. In some cases, in fact, state lawmakers have decided that the social contract provided by the federal government is not generous enough. It was a blue state that first established universal health insurance and, today, it is a handful of blue states that offer paid family and medical leave.

In the red states, government is cheaper, which means the people who live there pay lower taxes. But they also get a lot less in return. The unemployment checks run out more quickly and the schools generally aren’t as good. Assistance with health care, child care, and housing is skimpier, if it exists at all. The result of this divergence is that one half of the country looks more and more like Scandinavia, while the other increasingly resembles a social Darwinist’s paradise.

...By nearly every measure, people who live in the blue states are healthier, wealthier, and generally better off than people in the red states. It’s impossible to prove that this is the direct result of government spending. But the correlation is hard to dismiss. The four states with the highest poverty rates are all red: Mississippi, Louisiana, Alabama, and Texas. (The fifth is New Mexico, which has turned blue.) And the five states with the lowest poverty rates are all blue: New Hampshire, New Jersey, Vermont, Minnesota, and Hawaii. The numbers on infant mortality, life expectancy, teen pregnancy, and obesity break down in similar ways. A recent study by researchers at the American Institute for Physics evaluated how well-prepared high schoolers were for careers in math and science. Massachusetts was best, followed closely by Minnesota and New Jersey. Mississippi was worst, along with Louisiana and West Virginia. In fact, it is difficult to find any indicator of well-being in which red states consistently do better than blue states.

...Since red states have more poor people, and since their state governments spend less money on the safety net, they receive a larger share of federal funds. Among states that voted Republican in the last three elections, all but one gets more money back from the federal government than it pays in taxes. For most Democratic states, it’s the opposite. Looked at this way, the red states are the moochers and the blue states are the makers.

...Restricting access to public assistance and programs obviously isn’t on the same moral plane as denying people the right to vote or holding them as slaves. But these things should weigh on our consciences all the same. Food stamps keep people from going hungry. Unemployment checks prevent people from losing their homes. Health insurance keeps people from suffering and dying. Food, shelter, medicine—these are basic needs to which all people, and certainly all Americans, should be entitled. Over the course of the last century, from the Progressive era through the New Deal and Great Society, the United States slowly but surely moved toward guaranteeing those things. Giving the red states the power to deviate from this course means giving them the right to undo that progress.

Advocates for the red-state approach to government invoke lofty principles: By resisting federal programs and defying federal laws, they say, they are standing up for liberty. These were the same arguments that the original red-staters made in the 1800s, before the Civil War, and in the 1900s, before the Civil Rights movement. Now, as then, the liberty the red states seek is the liberty to let a whole class of citizens suffer. That’s not something the rest of us should tolerate. This country has room for different approaches to policy. It doesn’t have room for different standards of human decency.

But the divide may be unbridgeable.  The South remains invested in bizarre and fanciful notions, some long obsolete others simply unhinged, such as Manifest Destiny, American exceptionalism and the Bush Doctrine.   As the article reveals, a lot of the South's disdain for "big government" is anchored in a perception that the social safety net is a vehicle for the transfer of wealth to the poor, i.e. blacks.   And the election of Barack Obama has demonstrated, sickeningly, that racism and bigotry remain close to the bosom of the South.

The United States, from the Rio Grande up to the 49th Parallel, is a pretty big territory.   Maybe it is time that Red and Blue-America faced up to their irreconcilable differences and parted company.   Here's one point the article overlooks.   With the onset of climate change; particularly severe storm events, severe floods and sustained droughts, the viability of the South will be the most heavily impacted.   That will only exacerbate strains between North and South, fiscal and political.   Maybe the North is indeed, "Better Off Without'Em."
Posted by The Mound of Sound at 10:46 AM

I have been a Canadian citizen since '76 but was born and raised in California, and all I can say re this article is: spot on!
The only quibble I have is that the great divide has been there for a long, long time, and is nothing like a new development, but the democratization (and corruption) of the media we all share has made this long-held "diversity" more blatantly obvious.
I have often wondered why the US did not morph into something akin to the European Community...it makes the most sense
philosophically.. unlike Canada, where we have an ebb and flow of political differences that seem to constantly change...
But the States? Nope, frozen, like pillars of salt, in their own fantasies, and never to bridge that gap, but the really strange thing is that if this separation occurred, there would be little hue and cry...not 'til later, when another Katrina happened, or tornadoes destroyed Red State livelihoods, such as they are...
My theory, is that religion has played a very damaging role in creating this chasm of misunderstanding, ignrance and bigotry...and nothing that happens will change the pernicious influence of religion in the US anytime soon..better to go your own way, rather than hold each other back..with generous immigration policies of course, for all the women, people of colour and educated folks to be able to 'escape' their rural roots and move to either Coast...

No, you're absolutely right. The "great divide" you mention preceded the Civil War. In fact, aspects of it emerged as far back as the War of 1812 with the southern Warhawks in opposition to the northern men of commerce.

For whatever reasons, and there were many, the U.S. never healed during its decades of prosperity and the far more difficult and challenging era on which we're all embarked re-opens and deepens the wound.

I don't know, C.P. but my American friends seem to sense something is profoundly wrong in their country. Then again, so do those on the other side.

One of the many reasons I left and did so gladly was that the polarization was doing my head in, and I knew that there had to be another way...
Gotta say, though, that Harpo seems to be dragging us down to a place far too similar to make this ol' immigrant feel very comfortable..we need to look to ourselves and fight this with everything we have, while we still have anything worth fighting for..
The US? I don't know that they will ever recover...

I suppose you still have family in the States, CP, just as I have many dear friends, a couple of whom fought in the Viet Nam war, from my undergrad days.

There was a time America was truly great - troubled but great and it embraced, with conviction, a belief in a better future. It was, in so many ways, a wonderful place.

Then it changed. The social cohesion seemed to go first. Then the inner strength of the place seemed to be drained out. It's telling that Americans are still the most "productive" workers on the planet. Only today those "most productive" workers need to have two or maybe three jobs to keep up their once secure standard of living.

Now, as you'll find in earlier posts on this blog, even The Economist is pleading for radical "centrist" politics and a "Rooseveltian" (their term, not mine revolution, sweeping aside cancerous special interests and privilege.

Surprising? Hardly. The Economist, like the IMF, the World Bank, and virtually everyone else outside the American (and Canadian) political bubble have finally become convinced of an inescapable fact - that distorted income and wealth inequality was toxic to modern Western economies.

Fighting today's Big Money is like fighting Big Fossil. They're both fighting rearguard actions. They're ultimately realists. But, using their economic power and political influence, they can keep this going for years to come.

I really, truly hope for a grand enlightenment to sweep across the length and breadth of the United States, a truly "Rooseveltian" sort of thing that would help lead the rest of the world, sort of like things used to be.

Where did you learn history? Ot isn't an issue if states; it's an issue of party affiliation. The Democrats were the party of slavery, fought a war to keep it, terrorized blacks afterwards via the KKK, CREATED AND MADE JIM CROW A NATIONAL POLICY, rejected Eisenhower's Civil Rights act of 1957, and attempted to filibuster the civil rights act of 1964. Ot was the Republican Party which freed them if all these constraints only to have the Democrats under Johnson destroy the black family via the social welfare program to the point 75% if all blacks are now born out of wedlock and raised in single parent homes. Liberals are communist in waiting and a destructive force in this nation.