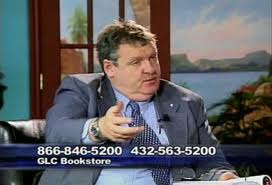 Looking at the United States today or at least the Tea Party half of it is like sneaking into an old-time carnival Freak Show.   There is a big chunk of the American population seriously detached from reality and some of those actually ran for the Republican presidential nomination - you know who I'm talking about Michelle, you too Newt.   There are plenty more, crazy people like Inhofe, Akins and Mourdock looking for seats in Congress and a good many of them will win.   In today's America, being crazy is no bar to success, none whatsoever.

The crazy bowl may be full to the brim but there's always room for just one more.   This time he's anti-gay Christian leader John McTernan.    Pastor John knows why America is getting hammered by Hurricane Sandy.   God is punishing the country for its tolerance of homosexuality.

“God is systematically destroying America” as punishment for the “homosexual agenda.”

“Both candidates are pro-homosexual and are behind the homosexual agenda. America is under political judgment and the church does not know it,” McTernan wrote on his website.

McTernan also uses religion in his attempt to rationalize why the storm is hitting now, explaining that it’s been 21 years since the “perfect storm” hit New England in 1991.

“21 years breaks down to 7 x 3, which is a significant number with God. Three is perfection as the Godhead is three in one while seven is perfection.”

Crazy?   Hell yeah, batshit crazy and, in America, you can take that shit straight to the bank.
Posted by The Mound of Sound at 12:32 PM

The problem MOS is Republicans and people with whom your blog is about, are walking around with brain bruises. They were dropped on their head when very young and have not recovered.