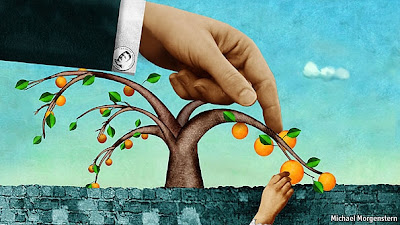 The ordinarily conservative magazine, The Economist, is calling for radical political reform, what it calls "true progressivism."

One reason why Wall Street accounts for a disproportionate share of the wealthy is the implicit subsidy given to too-big-to-fail banks. From doctors to lawyers, many high-paying professions are full of unnecessary restrictive practices. And then there is the most unfair transfer of all—misdirected welfare spending. Social spending is often less about helping the poor than giving goodies to the relatively wealthy. In America the housing subsidy to the richest fifth (through mortgage-interest relief) is four times the amount spent on public housing for the poorest fifth.

Even the sort of inequality produced by meritocracy can hurt growth. If income gaps get wide enough, they can lead to less equality of opportunity, especially in education. Social mobility in America, contrary to conventional wisdom, is lower than in most European countries. The gap in test scores between rich and poor American children is roughly 30-40% wider than it was 25 years ago.

...The priority should be a Rooseveltian attack on monopolies and vested interests, be they state-owned enterprises in China or big banks on Wall Street. The emerging world, in particular, needs to introduce greater transparency in government contracts and effective anti-trust law. It is no coincidence that the world’s richest man, Carlos Slim, made his money in Mexican telecoms, an industry where competitive pressures were low and prices were sky-high.

Next, target government spending on the poor and the young. In the emerging world too much cash goes to universal fuel subsidies that disproportionately favour the wealthy (in Asia) and unaffordable pensions that favour the relatively affluent (in Latin America). But the biggest target for reform is the welfare states of the rich world. Given their ageing societies, governments cannot hope to spend less on the elderly, but they can reduce the pace of increase—for instance, by raising retirement ages more dramatically and means-testing the goodies on offer. Some of the cash could go into education. The first Progressive era led to the introduction of publicly financed secondary schools; this time round the target should be pre-school education, as well as more retraining for the jobless.

Last, reform taxes: not to punish the rich but to raise money more efficiently and progressively. In poorer economies, where tax avoidance is rife, the focus should be on lower rates and better enforcement. In rich ones the main gains should come from eliminating deductions that particularly benefit the wealthy (such as America’s mortgage-interest deduction); narrowing the gap between tax rates on wages and capital income; and relying more on efficient taxes that are paid disproportionately by the rich, such as some property taxes.

Still decidedly conservative, to be sure, but this sort of advocacy is long overdue from the Right.   Their post-Reagan ideology is rotten to the core with inconsistency and hypocrisy which is one reason it's bundled up in phrases of a Grade 10 level of simplicity.   How else to obscure the sophistry?

Yes, "radical centrist politics" are badly needed and long overdue but it would be a lethal blunder to limit their scope to economic reformation.   We desperately need this same sort of eyes-open, clear-headed and firmly centrist reason to address the gamut of the challenges we face today.

Email ThisBlogThis!Share to TwitterShare to FacebookShare to Pinterest
Labels: radical centrism, The Economist

What a concept -- radical centrism!
Let's start investing in the young.

Absolutely, Owen. This same issue of The Economist has an interesting look at how traditional, historic inequality in South America is being beaten back and not just by the more overtly leftist governments. It's the result of nurturing an emerging middle class through, in no small part, investing in primary and secondary education.

By contrast, we Norte Americanos, have disparaged our middle class and allowed it to decay. We failed to value and defend the greatest asset we ever had, the one that did more than anything else to give rise to our affluence - our middle class.

That 30-40% gap in just 25 years is astonishing. I knew the Reagan era ushered in a long period of deriding and defunding public school education but such figures suggest that the public schools are being transformed into welfare schools.

Hi, BY. Yes, and the express goal has always been to dismantle the "Rooseveltian" reforms The Economist would now see restored.

We are coming full circle as the intellectual Right finally grasps the reality that the key to a prosperous economy is nurturing the most wide-reaching, most robust middle class possible. That was the key to stability and expansion in the decades post WWII. Narrow, Movement Conservative self-interest could never grasp that key reality.