The Costs of Keeping Cool 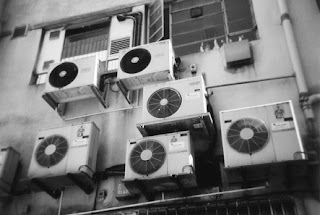 North Americans had a tough and expensive time keeping cool over the summer.   A prolonged heat wave coupled with sustained drought (that continues in many places) drove demand for plenty of air conditioning.

Know how much electricity Americans, in a normal year, consume for cooling?   More than the entire electrical consumption of the billion plus population of Africa.   Vehicle air conditioners are said to account for 7 to 10-billion gallons of gasoline annually.

And now, with the planet warming and billions in some of the hottest regions coming into newfound prosperity, the demand for air-conditioning and the emissions nightmare associated with it is set to skyrocket.

The climate impact of air conditioning our buildings and vehicles is now that of almost half a billion metric tons of carbon dioxide per year.

Yet with other nations following our lead, America’s century-long reign as the world cooling champion is coming to an end. And if global consumption for cooling grows as projected to 10 trillion kilowatt-hours per year — equal to half of the world’s entire electricity supply today — the climate forecast will be grim indeed.

Because it is so deeply dependent on high-energy cooling, the United States is not very well positioned to call on other countries to exercise restraint for the sake of our common atmosphere. But we can warn the world of what it stands to lose if it follows our path, and that would mean making clear what we ourselves have lost during the age of air conditioning. For example, with less exposure to heat, our bodies can fail to acclimatize physiologically to summer conditions, while we develop a mental dependence on cooling. Community cohesion also has been ruptured, as neighborhoods that on warm summer evenings were once filled with people mingling are now silent — save for the whirring of air-conditioning units. A half-century of construction on the model of refrigerated cooling has left us with homes and offices in which natural ventilation often is either impossible or ineffective. The result is that the same cooling technology that can save lives during brief, intense heat waves is helping undermine our health at most other times.

...China is already sprinting forward and is expected to surpass the United States as the world’s biggest user of electricity for air conditioning by 2020. Consider this: The number of U.S. homes equipped with air conditioning rose from 64 to 100 million between 1993 and 2009, whereas 50 million air-conditioning units were sold in China in 2010 alone. And it is projected that the number of air-conditioned vehicles in China will reach 100 million in 2015, having more than doubled in just five years.

...The Middle East is already heavily climate-controlled, but growth is expected to continue there as well. Within 15 years, Saudi Arabia could actually be consuming more oil than it exports, due largely to air conditioning.

The report from Yale's 360 Environment is well worth a complete read.   A big factor in my own decision, 30-plus years ago, to relocate from Ontario to coastal B.C. was to escape central Canada's punishing summer weather.   It's a decision I have never regretted.

But our summers (when they actually arrive) can get uncomfortably warm for brief spells and I've noticed a few homeowners putting in central air.  I went another route.  In the course of ordinary renovations, I replaced all the low-flow, contractor-grade, aluminum-frame windows with high-efficiency, casement windows and equally effective blinds.  Every window in the house can open out like a door.   To fend off the summer heat, the windows are closed and the blinds drawn during the day.   As the sun goes down and the coastal breezes appear, the windows are opened wide and the blinds go up and all that fresh, cool, fragrant air literally flushes the residual heat out of the house.  It's very much like bringing the outdoors inside and it's very enjoyable.  And it's a low-carbon (or no-carbon) alternative to air conditioning.