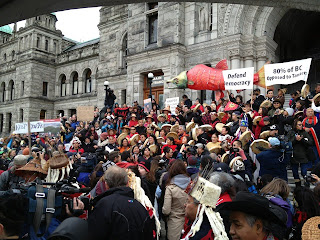 The police didn't intervene.  From the comments of Victoria's deputy police chief, Del Manak, it actually sounded as if the cops were on side with the demonstrators.  “It’s a peaceful, vocal protest and we don’t want to get in the way of sending a strong message to government.”

There were no arrests. The protesters at the Defend Our Coast demonstration, led by Coastal First Nations, environmental groups and unions, were passionate and noisy but well-behaved. 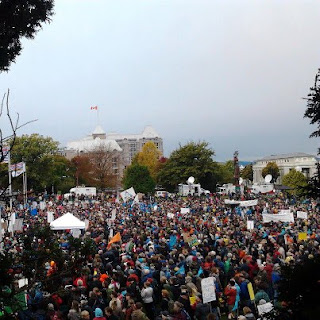 The aim was to send a strong message to the federal and provincial governments that British Columbians are overwhelmingly opposed to the proposed Enbridge Northern Gateway pipeline carrying Alberta oilsands bitumen to Kitimat for export to Asia, planned twinning of the Kinder Morgan oil pipeline from Edmonton to Burnaby and oil supertankers on the coast.

“Together, we can stop this,” said Squamish First Nations Chief Ian Campbell.

Grand Chief Stewart Phillip said First Nations are standing shoulder-to-shoulder to stop the proposed pipelines. “We will fight this insanity through the joint review panel, in the courts of this country and, if necessary, at the barricades on the land itself,” he said.
“We will not stand down, we will not step back. We will stop Enbridge and the Kinder Morgan proposals dead in their tracks.”