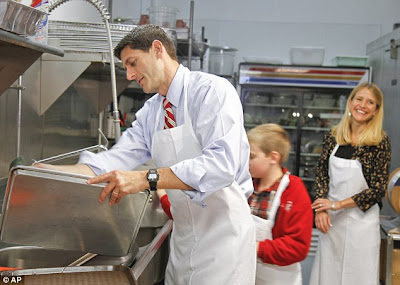 Romney running mate Paul Ryan really doesn't like the poor or their soup kitchens.  In fact, if he had his way, he'd slash the very social spending they depend on.

That's why it was curious when Ryan, with wife and three kids in tow, showed up uninvited at the soup kitchen in the poorest town in America, Youngston, Ohio.  The blatant hypocrisy even made the pages of Germany's Der Spiegel:

On Saturday afternoon, the Republican Vice-Presidential candidate Paul Ryan paid a short visit to the dining hall for a photo op with his wife and three children as they helped doing the dishes.
The only problem was that serving had ended. The kitchen had already been scrubbed clean. [The] homeless people had all gone. Now the director of the Mahoning County St. Vincent de Paul Society has criticised the Vice-Presidential candidate for using the diner for political reasons.

“They showed up there and they did not have permission and it’s against our bylaws to do that sort of thing. We are apolitical because the majority of our food is from private donations,” Brian Antal told the Youngstown Vindicator.

Infuriation at the episode has certainly not been mellowed by the fact that Paul Ryan’s own economic plan sees cutbacks in Federal subsidies to charitable organisations such as the one which runs the Youngstown dining hall. Last year, the hall received some DKK70,000 in Federal support, while private donations totalled about DKK1million.

“It’s a bit hypocritical to put it mildly,” Antal says.

“We cannot accept seeming to support the Republicans by letting them use our premises for photo-ops,” he adds.

A Ryan spokesman told the US media that the visit to the dining hall had been a good opportunity to pay tribute to the voluntary work carried out by millions of Americans every day.

The worst thing is that a great many Americans still wouldn't hesitate to vote for a guy this creepy.
Posted by The Mound of Sound at 1:12 PM