He Never Saw It Coming 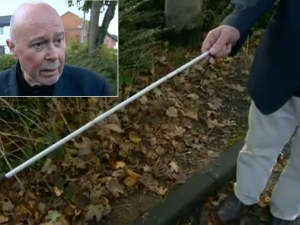 61-year old Colin Farmer (above) is blind and, due to two strokes, walks at a snail's pace using the standard white cane.


Enter the local cops in Chorley, Lancashire, where Farmer was wending his way to a pub for a drink with his pals.   The police were responding to reports of a man in town wielding a deadly martial arts weapon, a Samurai sword.

"The whole thing was like being trapped in a nightmare," he told the Chorley Guardian.

Mr Farmer said he heard shouting on the street but did not know what it was about and thought he was about to be "attacked by some hooligans".

He was then struck by the Taser and fell to the ground, dropping his white stick on the floor before a policeman handcuffed him.

Farmer is said to be considering legal action against the cops.  Go for it.

Email ThisBlogThis!Share to TwitterShare to FacebookShare to Pinterest
Labels: taser

I certainly hope he sues these idiots.