One Alberta Government Too Many 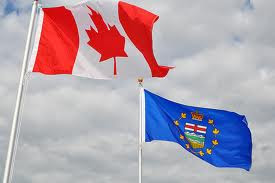 The Alberta government in Ottawa does things the provincial Alberta government can't do.   It signs treaties with China for example.   Only the federal Alberta government could put a loaded pistol in Beijing's hand and invite them to hold it to the heads of the people and province of British Columbia should they dare stand against the environmental rape of their land and coastline by Alberta bitumen.

Once you see both Alberta governments, provincial and federal, what Ottawa is doing for Edmonton becomes logical, ordered and even sensible in a fiendish sort of way.   Nobody needs to see this state of affairs more clearly than the people of British Columbia, especially those who elected so many Conservative MPs in the last election.   Once we see that these B.C. Tories are actually serving the federal Alberta government I expect we'll be a hell of a lot less inclined to re-elected the bastards.

It's easy out here to see Harper's China tar deal as "economic treason" (as Andrew Nikiforuk terms it) yet it must look like anything but treason to either of our Alberta governments.  And there's the rub.

It's sad to know that the rest of Canada doesn't have the sand to stand up to these Alberta governments but they're conveniently lined up with their alms bowls for their share of the action.   Ontario, for example, is in line to receive many times more bounty out of the Northern Gateway than British Columbia is to receive.   Having federal and a provincial Alberta governments can make that sort of stuff happen.

The stage is set for a pretty interesting confrontation between the province and people of British Columbia in one corner and the massed power of both Alberta governments, China and their spineless minion premiers from the rest of Canada.   Anyone who can't see that as a recipe for west coast separatism?
Posted by The Mound of Sound at 11:41 AM

And all the while reaping only 28% revenues from all that mess in the north of the Province....now isn't that rich?

The sad thing is that the majority of BC federal seats went to the 'federal party of Alberta'. There are other provinces that did *not* vote a majority of their seats to the 'fed Albertans'.

Please do not paint us all with the same brush.

28 per cent, Anyong? That sounds on the rich side. Then you also have to work out the subsidies and deferrals that government lavishes on the producers and the net figure comes out far lower.

That is correct Mound. We ought to be getting 80% straight across the board nothing less...Norway is an example of holding out. They have 350 billion in a reserve for the future. We need to take a good look at what they have done and also Iceland wouldn't be far off the mark either.